Earlier this month the Hunger Intervention Program in Seattle held Feeding The Soul 2010. For just a $25 donation, an eight course meal was served by chefs Brian McCracken and Dana Tough from Spur Gastropub and the culinary team from Intellectual Ventures – Maxime Bilet, Grant Crilly, Sam Fahey-Burke, Anjana Shanker and Johnny Zhu. The chefs from Intellectual Ventures are, along with Nathan Myhrvold and Chris Young, behind the upcoming “cookbook” Modernist Cuisine: The Art and Science of Cooking, due for release next March. A chance to eat their food and meet them as well? Done deal.

The food was delicious and I had a chance to briefly speak with all of them. I introduced myself and told them about this blog and how we at Jet City Gastrophysics are planning to cook our way through the entire cookbook. There were some eyebrows raised and a “good luck” thrown my way. True, I don’t have a freeze dryer or a rotary evaporator, but that doesn’t mean I can’t at least acquire access to one somehow. Where there is a will, there is a way.

And, true to my word, I have begun to cook my way through it.

It’s not published yet – how is that possible? On August 13th, they put out a 20 page excerpt of the massive tome available for download from their website. I’m sure like me, gastronomes across the world downloaded and quickly got to reading the first pages of the 2400 that will be available in March 2011.

The excerpt is from the fourth section of the first chapter of the first volume, entitled The Story Of This Book. It goes into detail of the origins of Nathan Myhrvold’s research into sous vide techniques online to the development of a full time cooking staff and publishing house to put out the work. Next they explain the photography, a step by step review of each volume, and then on to the recipes they developed and the special format that they are in. And to illustrate, they printed some example recipes. Recipes waiting to be used.

An Example Recipe. Just Waiting To Be Made.

There are three recipe examples: Sous Vide Instant Hollandaise, Making a Smooth Puree, and Monkfish with Mediterranean Flavors. Each recipe is an example of the three types of recipes found in the book: Example, Parametric and Plated Dish. Example recipes are considered the shortest and simplest, intended as components for other dishes. Parametric recipes focus on a particular ingredient or characteristic – or, as they call it, a parameter. The idea is to take a concept in its simplest form and show, at-a-glance, the variations of that concept (I was in web development for years, and their application of design for visual information is excellent. I wonder if they had Edward Tufte consult on the project). Finally, the plated-dish recipe brings it all together so you can create an entire dish from a single recipe.

From the three examples, the monkfish recipe calls for components that they did not show: Pâte à Choux, Zucchini Blossom Beignet, Fish Spice Mix and so on. So that left the other two. I decided to start with the shortest and simplest: Sous Vide Instant Hollandaise.

Making Of A Modernist Sauce

I collected the ingredients necessary and started in. The format is really straightforward and easy to understand. Of course, that meant I had to screw it up immediately.

As per the recipe, I put together the white wine, white vinegar and minced shallots in a pan and began to reduce them down to a syrup-like consistency. But, it wasn’t getting syrupy. The liquid kept dissipating, but the onions weren’t breaking down. And soon I had a thick gop of caramelized onions and nothing else. How did this happen?

Oh. Um, yeah. So I did it again, and pulled out 20g of onion flavored wine reduction.

Next up I took four egg yolks and blended them with the reduction and water. I did not measure out the egg yolks by weight. The recipe gave me an easy out by offering four large egg yolks as a measurement, and I took it. I put the mixture in a bag and vacuum sealed it. It fit in one of the small bags I have, and it sealed just in the knick of time before the ingredients boiled over into my vacuum sealer, creating both a big mess and having to start again from scratch. 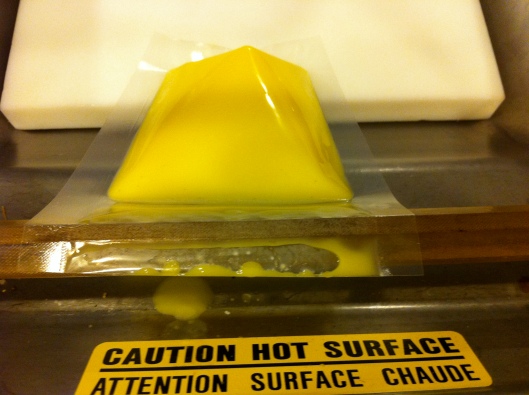 I plopped the sealed bag into the sous vide bath for 30 minutes. For the butter, I used what Chef Richard Blais calls one of the more underutilized kitchen instruments: the microwave. In 40 seconds my melted butter was ready. I took the packet out of the water, mixed its contents in with the butter, then added salt and malic acid.

What is Malic acid and what is it doing in my hollandaise sauce? Malic acid is the main acid found in unripe apples, cherries and many other fruits and vegetables. As an ingredient, it is supposed to add a distinct sourness, has a lower melting point than other acids and is more soluble than citric acid, which is also a sour flavor enhancer. Why it is specifically included in this recipe? I have no idea. We’ll all have to wait until the book comes out. But in the meantime, you can find it a your local vitamin supplement store. This means you’ll have a lot of Malic acid lying around – 100 tablets worth. It is also supposed to stimulate metabolism and increase energy production, so if you work out a lot, maybe it will help you burn calories. I don’t know, just a thought. I mean, after all this hollandaise sauce. Anyway.

I poured the mixture into my ISI Thermo Whip and placed it back in the bath to keep it warm. Next on the example recipe is something called a two-stage fried egg, which references another part of the book. So having no idea (yet) what a two-stage fried egg is about, I decided to poach an egg, fry some ham, toast a muffin, and spray some hollandaise.

Is is not creamy like your usual hollandaise, but a thick foam. The texture is definitely different and calls for unique plating or pairing. When you have a traditional dish like the one above and one of the textures is not what you expect, it jumps out at you. I’m curious how it will taste with a two-stage fried egg.

Also, the name is a bit misleading. You can make traditional hollandaise in 10 minutes with a blender. This took 30 minutes for the sous vide alone, plus another 15-20 minutes for the rest. It is instant in the fact that you can just walk up with your cream whipper and blast out sauce on demand. At least for 90 minutes – that’s the maximum time you’re supposed to keep the cream whipper hot. Once again, the example recipe is all we have at this point – I’m sure the supporting text will provide the context.

Regardless, it is delicious. I loved it. The recipe does yield a large amount – something like 1 1/2 cups. And that’s prior to foaming up – I could have served 10 people with all that I made. I sprayed the rest into a container and put it in the fridge. Then it gave me a little surprise: it settled, cooled and made an awesome hollandaise flavored whipped butter. I had it today on some toast as a little snack. Scrumptious.

So the first step in the thousand mile journey of cooking through Modernist Cuisine: The Art and Science of Cooking has been taken. I’m looking forward to the adventure.