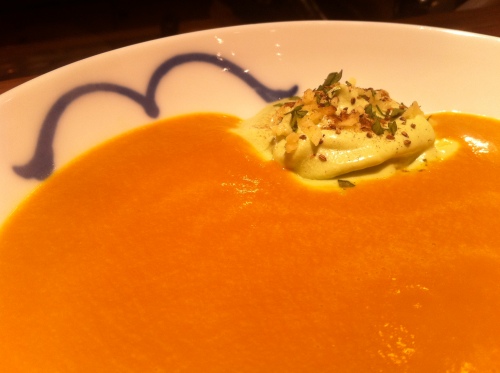 This one is always touted as an easy introduction to Modernist Cuisine. It has two main ingredients: carrots and butter. It has two steps as well: pressure cook carrots in butter for 2o minutes.  Then add carrot juice, puree, and season.  Voila.

Strange thing is, well, my version, it took me most of the day.

Nothing Rhymes With Orange 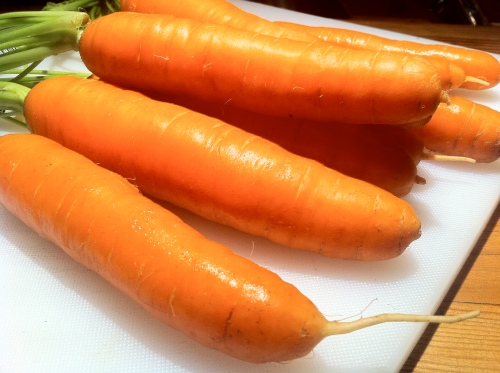 They suggest ‘young carrots’ in the recipe.  Not baby carrots, mind you, but young carrots. Adolescents, I guess. I don’t have access to a carrot farmer so I can’t be too choosy.  I started off with a couple of bags of carrots. They were organic, though, so I have that going for me.

Next was a bunch of prep – peel, peel, peel some more, then juice, juice, juice.  A panopoly of scraps were left for the compost heap.  I could have just bought carrot juice and had been done with it, but where’s the fun in that? 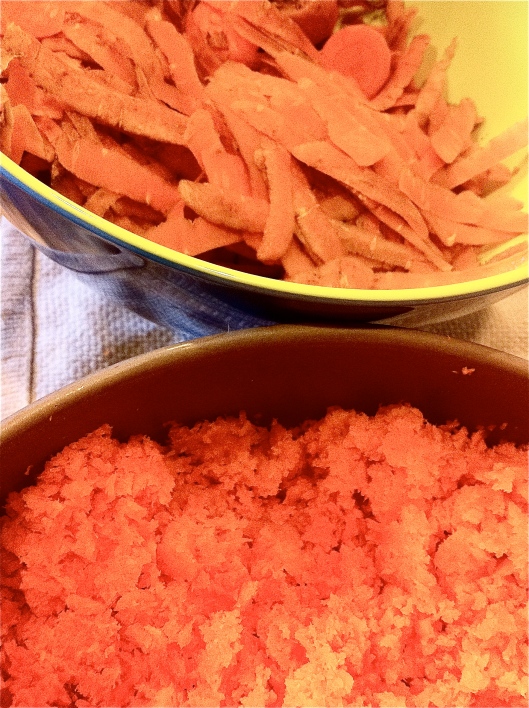 I took some carrot juice and brought it to a simmer while I melted butter into another pan with carrot juice.  With these I was going to make two components for the soup: carrot stock and carotene butter.  And the best way?  A centrifuge, of course.

As always, first I measured out all four containers so the centrifuge would be balanced before giving them a whirl. 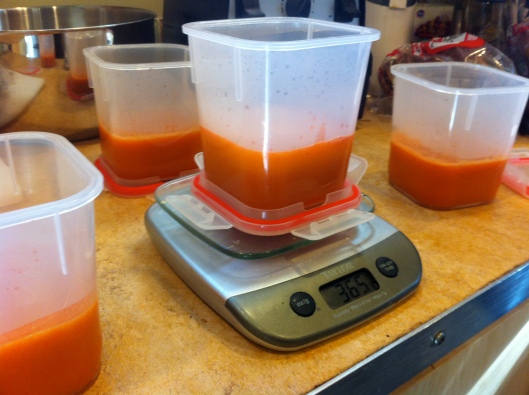 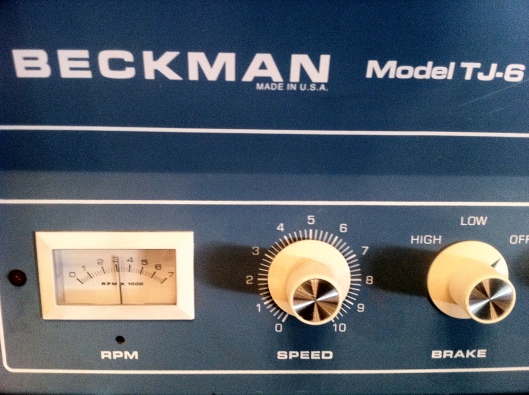 They suggest spinning the juice at 10,000 rpm for one hour.  For my slower centrifuge, that worked out to over six hours.  I decided three hours should do the trick.  Which it did – the solids in the carrot juice stuck to the bottom as a paste, while the butter separated into distinct layers. 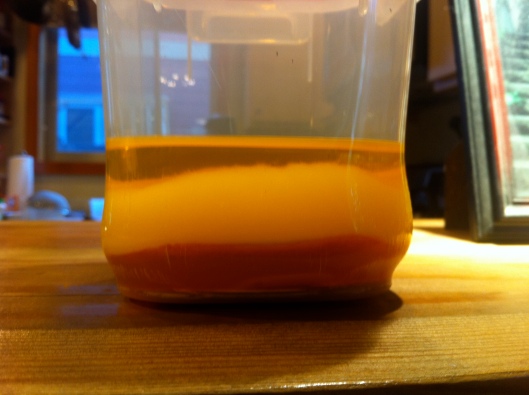 After an hour in the fridge, the butterfat coagulated and I was able to remove it to have a big block of carotene butter. 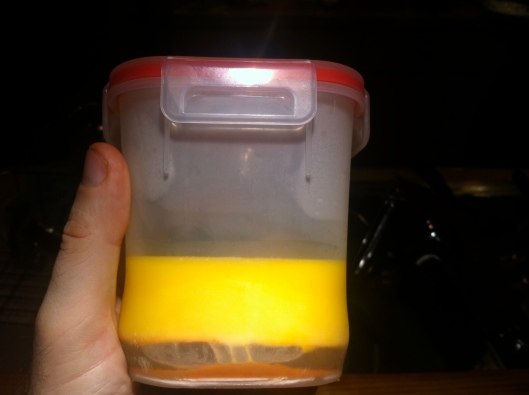 I remelted it, poured into molds, and froze them.  Now have a bunch of carrot butter to add a little zing to whatever dish I decide to put it in.  What’s the word – amazeballs?  Amazeballs! 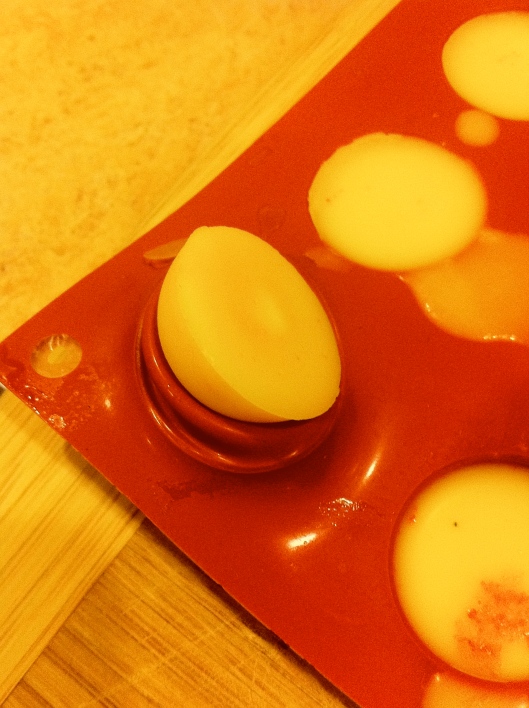 The centrifuged carrot juice was a revelation for me.  I’ve used the centrifuge to make such things as pea butter, clarified brown butter and tomato water, but this was the first time I made something to be used as a stock.  Usually, carrot soup uses a vegetable stock, chicken stock, or just water to thin out the carrot puree and make it a soup.  The genius of this method is that the water is pure carrot juice, keeping the intensity of the carrot flavor intact.  And a light bulb went off when I realized I could make a pure juice stock out of any vegetable I wanted.  My soups are about to get way more delicious.

My next component to prepare was the coconut chutney foam. It’s not in the recipe, but in the ‘Making Of’ video that Modernist Cuisine put out, they suggest it as a garnish.  More appropriately, as a ‘pairing’.  An accompaniment.  You understand.

They first tell you to take mint, cilantro, and green chili, and blend them into a puree with a food processor.  There was no liquid added, so I just got a very fine mince.  Like all purees, they said to push it through a sieve.  As there was no real moisture, I just smashed green bits against a screen to no avail. There was nothing noted in their corrections and clarifications either. Mm.

The problem was solved, though.  The next step was to blend coconut cream and milk with the herb puree.  The Vitamix obliterated the herbs and I had a nice thick green liquid to simmer. 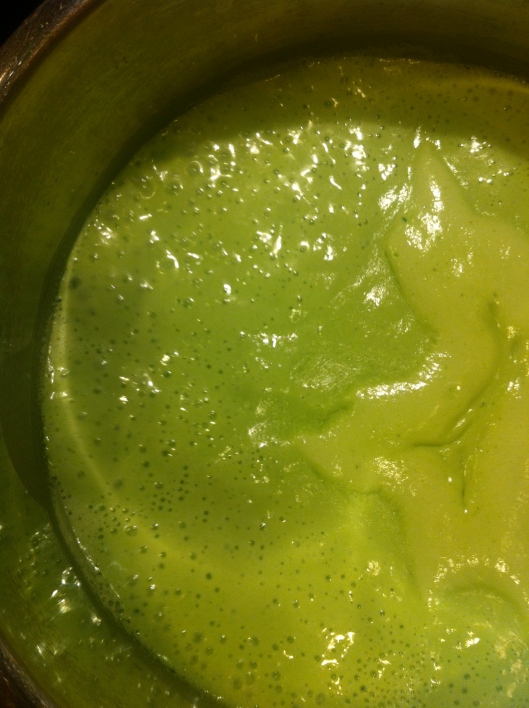 Before putting it on the stove, however, I had to add a hydrocolloid to thicken it up into a gel.  A low-acyl gellan.  Kelcogel F, CP Kelco brand, to be exact.  This is something I didn’t have on hand.  Luckily, this is a place where Modernist Cuisine shines.  I went to their parametric recipe for Best Bets for Gels.  A substitution of agar agar and sodium citrate could be used.  I calculated the percentage of each I needed for the recipe and added them in.  Once simmered, I poured the liquid into a pan and put it in the fridge.  And within 15 minutes, I had a gel.  Not like jello – it was much more fragile, and would tear more than the hard shear of gelatin.  But it did work. 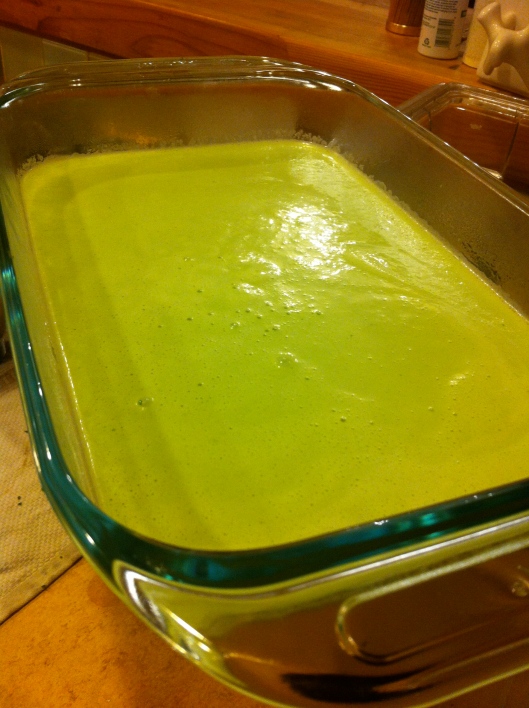 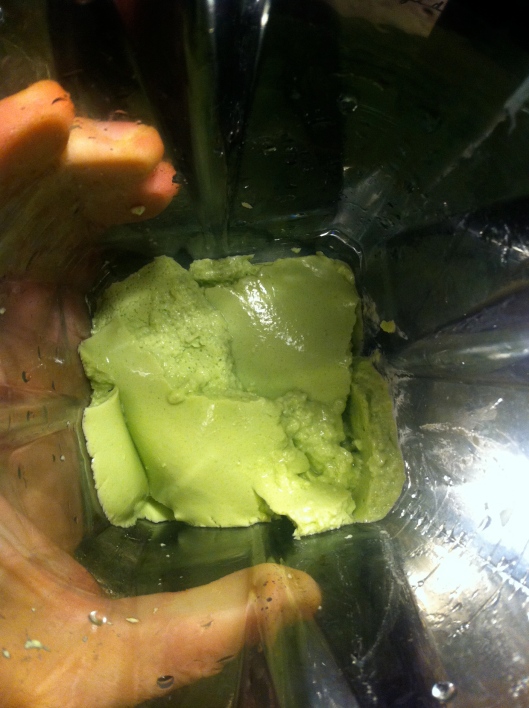 I spun it in the Vitamix to get it into a thick puree.  From there it went into my whipped cream siphon and into a water bath at 60C to keep warm until it was ready for showtime.

With my components prepared  (five hours or so after I started), I could continue with the soup itself.

I cut up 500g of peeled carrots.  Of course, just to make it that much more tasty, they recommend removing the core of the carrots, which is more bitter than the outer layer.  Well that’s not tedious.  Yes it is.  But in the name of good flavor, one must make the effort. 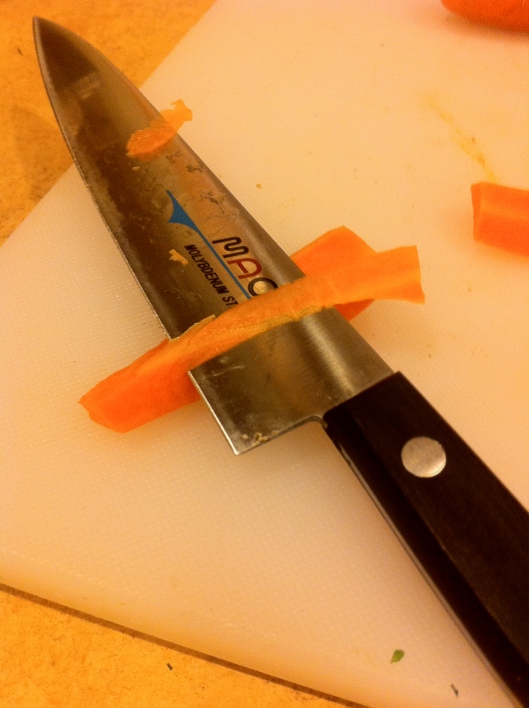 Next  I melted butter in a pressure cooker, and added in the carrots. 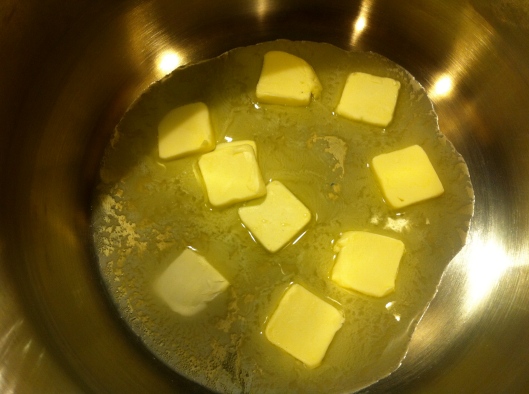 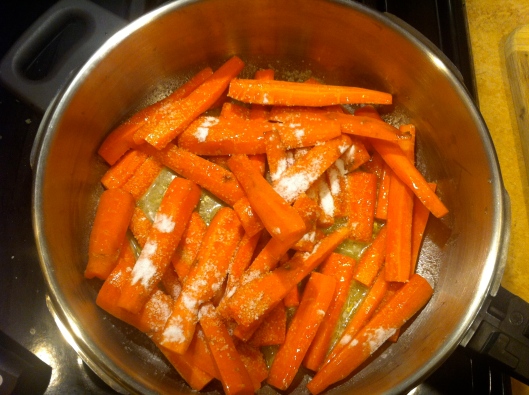 Now we need these things to caramelize.  Enter baking soda.  It accelerates the Maillard reaction, which not only browns the food, but creates a ton of flavor and aroma compounds.  And in a pressure cooker it only takes 2o minutes.  And boy, does it work.  My first batch was brown alright.  A deep, dark brown.  A burnt brown, you might say.  Yeah, I totaled the first batch – I had the heat up too high.  Had to start over again.  But I managed to get it right the second time.

The good batch was dumped into the Vitamix, mashed through a sieve, then put into a saucepan to heat up. The carrot stock was added along with a chunk of carotene butter to the mix.  Crazy carrot goodness.

All that was left was plating.  I charged the siphon and sprayed a dollop of coconut chutney foam onto a dish.  It wasn’t quite as firm as I had hoped – perhaps the change in hydrocolloids was the issue.  It still held up enough however.  I topped it with the minced ginger and tarragon, ajowan seeds and licorice powder.  I poured the carrot soup in.  And the dish was complete.

The flavor is rich and intense.  The caramelization is key.  It adds this depth of flavor that is just wicked delicious.  And once you mix in the coconut foam, which is substitution for sour cream, it just blows up on the palate (in a good way).  And then you bite into bits of tarragon and ginger that are like little fireworks of flavor with the carrot bliss….ah, it’s frickin’ killer.

Excuse me, I need to go eat my leftovers. 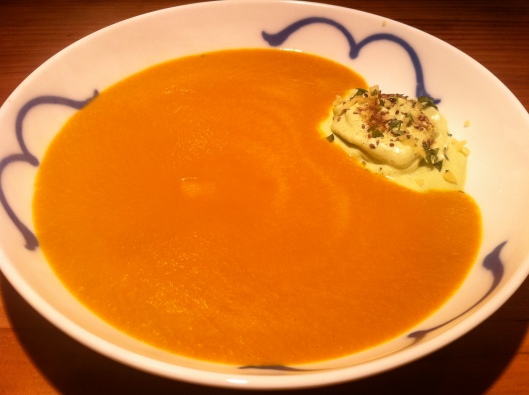