I had half of a flank steak left from my foray into microwaved beef jerky, so I needed to use it up.  Luckily, just 15 pages later in the The Work, there was a recipe for Kalbi Flank Steak.  This is interesting because in Korean, Kalbi means “rib”, and the marinade is applied mostly to beef and pork ribs.  But hey, we’re Modernists, right? Let’s see what a different technique applied to the same product can create.

This is a pretty simple recipe.  Just mix up the ingredients, seal it up with the steak, and wait for five days.  But where’s the science?  This is Modernist Cuisine, after all.   Well, what this recipe is demonstrating is the use of an acidic pH to tenderize tough cuts of meat. 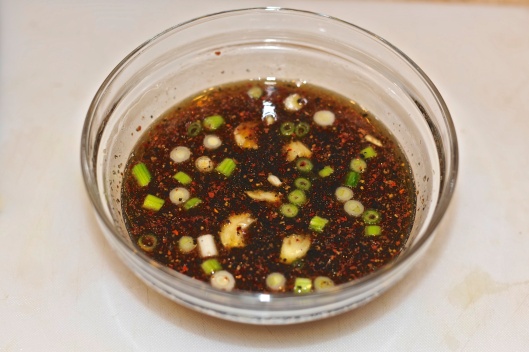 What is pH? It is the scale for determining the acidity or alkalinity of a solution.  The scale runs from 1 to 14.  Water is in the middle, at 7.  The most acidic is the lowest number, 1, like gastric acid.  The most alkaline, like bleach, is at 14.  A mildly acidic solution can do two things to a cut of meat.  First, it keeps the meat juicy by keeping the muscle fibers from collapsing, which otherwise would squeeze out the liquid within, making the meat less juicy.  It also weakens collagen fibers, which not only makes the meat more tender, but allows the muscle fibers to expand and make them even juicier.  Tender, juicy steak.  Yes, yes, that’s what we’re looking for.

The recipe calls for the marinade to have a pH of around 4.5.  A little more acidic than a tomato, but less than a cup of coffee.  I tested my marinade to see where it was on the pH scale.

Mm. It was .74 off.  The threshold of where protein begins to fall apart is 4.8, so even there I was .44 off.  It had been going down over the course of 30 minutes, so I went with it, and sealed it up with the steak.  Perhaps five days would do the trick.

After five days in the fridge, I pulled the steak out of the bag.  Its color had changed significantly and had infused the marinade into its flesh.  I vacuum sealed it back up and put it in the sous vide bath at 54C.  The recipe suggests it cook for one hour to up to twenty four hours.  I wanted to eat it that evening, so ten hours worked for me. 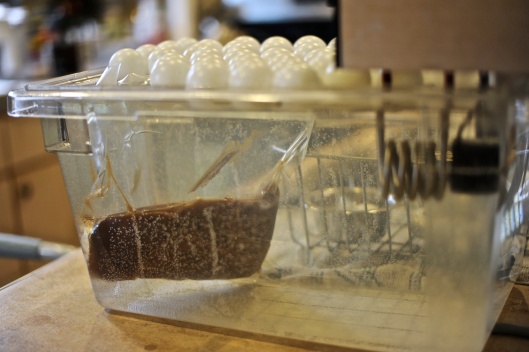 As with most cuts cooked sous vide, after I took it out I gave it a quick searing to get the maillard reaction happening and get those delicious flavor compounds.  And how was the steak?  Tender, tender, tender.  It tasted reminiscent of the beef jerky, but not as tart.  They share soy sauce, fish sauce, sugar and salt so this isn’t too surprising.

9. Slice, and serve with kimchi, butter lettuce and shiso leaves, kochujang paste, and other banchan (Korean side dishes).

Otherwise I dutifully did what the recipe asked.  Except I didn’t have any kochujang paste, so I left that out. But shiso leaves – wow!  I have never had them before and they are delicious!  I love new discoveries like that.

And there was another discovery.  Somehow I decided umeboshi was a Korean side dish. I have no idea how this happened. They are actually Japanese, and are extremely sour and salty pickled plums. I don’t recommend them with this dish, as they were…out of place. Woo-whee! I’ll have to find an appropriate dish for those suckers.  It turns out that sometimes acidification is not quite what you’re looking for.