“This shit is dangerous.  You inhale it, your lungs stick together, you die.”

So Chef Ian Kleinman told me about Transglutaminase during my private cooking class with him last spring. Transglutaminase (also known as TG or ‘meat glue’) is an enzyme that bonds proteins together.  If you have ever had imitation crab meat or chicken nuggets, you’ve eaten TG.  Although safe to eat, in powder form, it can be inhaled, and then work its magic inside your lungs.  So when we met last week to work with the stuff, we decided it was best to take precautions.

With safety glasses and masks on, we set about to working on some ideas.  Eric was called into work and couldn’t make it (he’s a busy guy, what with being invited to stage at Noma by Chef Redzepi among other things), so Scott and I collaborated.  With worked with three types of proteins: meat, fish and nuts. As with any experimentation, we had some success and some failures.

The first idea was simple enough – bind together strips of two different kinds of fish.  We made a slurry of TG with water and brushed it on the sides of the fish, and then vacuumed sealed the whole thing. 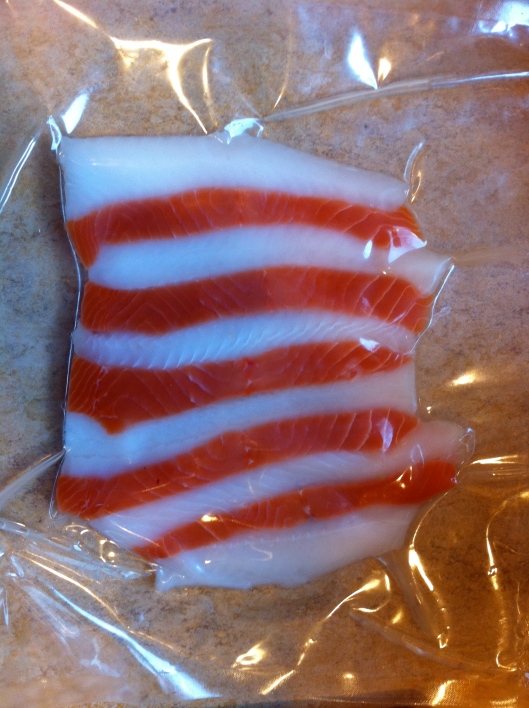 Unfortunately, we didn’t apply enough TG to the fish, and the strips didn’t bond together.  It was our first attempt using the stuff, so we learned that it’s OK to be a bit more liberal in our application.

Next up was nuts.  I figured nuts have plenty of protein, so they should bond together as well, right?  I crushed up some peanuts and almonds in my coffee grinder, then added in the TG.  I formed in into a disc using a pastry cutter and vacuum sealed it.  And, as with the fish, there was not enough TG to bind it together.

The crumbled pieces did have a bit of tension to them, so the TG seemed to have done its job somewhat.  I’ll need to add more next time and see if TG is ‘nut glue’ as well as ‘meat glue’.

I had an idea for an awesome piece of comfort food – chicken skin pork rinds.  I pulled the skin off some chicken wings and glued them together with pork skin, then rolled it up in cellophane.

It glued up nicely, though quite scary looking, like some frankenphallic nightmare.  I deep fried it and added salt and had pretty much what I was going for.  You had the delicious combination of fried chicken skin and pork rinds.  There needed to be a bit more chicken skin and a bit less pork fat, but it turned out very well.  I can see these being eaten at state fairs across America. 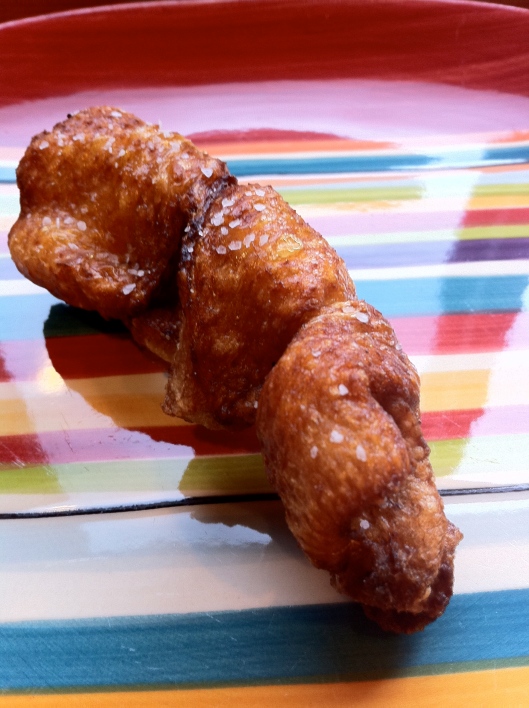 Finally, Scott had the idea of making shrimp paper. He minced the meat in a food processor and added TG, eyeballing the amount.  He added it to a vacuum bag, rolled it out flat and sealed it. 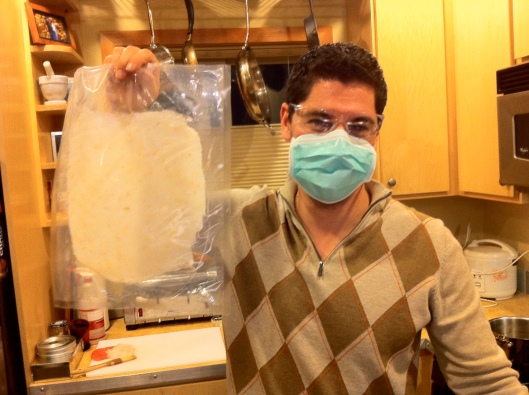 He then placed the bag in a cookie sheet on the stove filled with water and quickly cooked the shrimp.  From there it went into the fridge to set.  It worked great.  The result wasn’t thin as paper,but a more like a tortilla. A tortilla made of nothing but shrimp meat and TG.

I cut some rounds out of it and prepared a sweet dish and a savory dish with them. 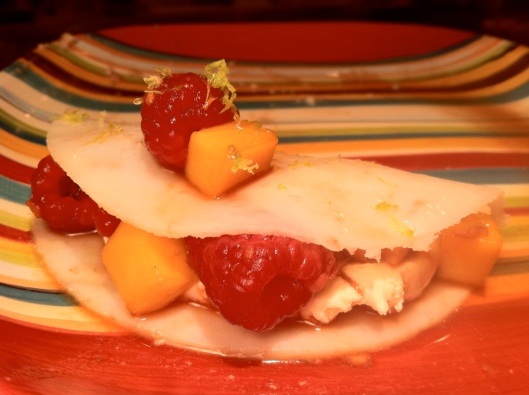 Both of us are very excited with the results and have a lot of ideas of what to do next.  For example, the tortilla could have easily been cut into strips for shrimp noodles instead of crepes.  As long as we avoid inhaling the stuff, TG looks to be a fun new component to cook with in the kitchen.