I’m reading (and cooking) through that massive tome that is Modernist Cuisine, and am currently at Book Two: Techniques And Equipment, Chapter Eight: Cooking In Modern Ovens, Section One: Cooking With Moist Air. It is here they put their first sentence that is entirely in italics: “Humidity governs the temperature at which food actually cooks“. This is an important point, and helps understand why things are cooking the way they are, down to your particular oven and location. This is covered in Book One on the physics of heat and water. The basic takeaway is that transferring heat from air into food is more even and efficient when water vapor is condensing onto cooler food. For example, onto a roast chicken.  Let’s observe.

Fowl In A Combi

The classic roasted poultry we have grown to love can be amazingly better when you fully exploit all the bells and whistles the combi oven has to offer, including low, precise temperature control, humidity control, and the space to hang the bird while it cooks.

You see, the section on combi ovens is based on the kind you find in restaurants.  Huge, stand alone machines that cost around $35000 and up, with something like 15 slots for pans.  My home version has three.  It’s a wee bit shorter.  Space to hang? Not so much.  But not that that stopped me.  So, first thing I did was substitute a cornish hen for a chicken.  A bit smaller, and should give me more room to work with in my oven.  Then I started in on the recipe.

After putting together a salt brine for the first step, the next step involved separating the skin from the meat.  I threw on some plastic gloves like the example in the book and went at it.

It was a slow process, as I didn’t want to tear it up.  I did a good job, with only one small tear at the joint of one the legs.  Next I took the salt brine and injected it into the breasts, 10% of the total weight of the bird. I somehow thought a small needle would be all I needed, but I had to pull out the big guns to fill them up. 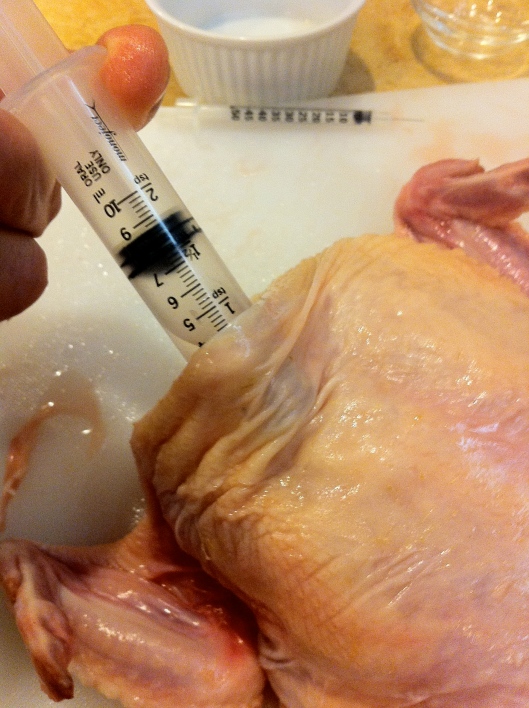 The next step was to air dry the bird for 48 hours.  This will dry out the skin and make it extra crispy and delicious, and well as let the brine suffuse through the meat.  But it needs to be hanged to do it properly.  So I got some twine from the local butcher, and strung it up in my fridge where I left it to hang out and dry out. 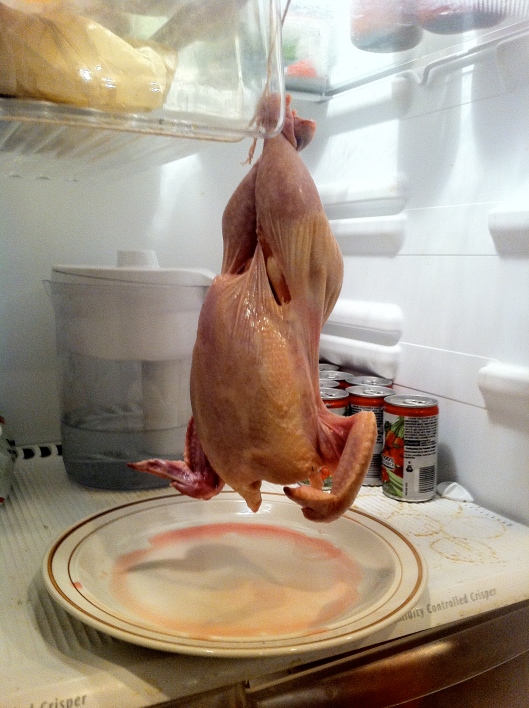 And after a couple of days, it did indeed dry out. Yes, not the prettiest sight to see in your fridge, but you gotta do whatcha gotta do.

My poor hen had another round of salt injections, and then I needed to hang it in my combi oven to cook.  My oven was still too small even for this smaller bird for it to hang completely.  If I laid it down in a pan, one whole side of skin would be in contact with the meat and get wet and not crispy and delicious.  I had to improvise.  And so I took my hen by the twine, and jury rigged her in there.

I set the combi for 140F, and let the hen cook until the breast meat was up to the same temperature.  The book said it would take about 4 hours, but mine took about 6.  The first part of the chapter deals extensively with the shortcomings of current combi ovens, and with those variances along with me using a home model vs. a professional model, I figured that might be the reason why.  It also didn’t seem to get up past 136F inside the breast meat with the oven set at 140F.  Once again, I think that has to do with certain quirks with my oven.  I’ll learn them soon enough.

After it (almost) reached its target temperature, I needed to let it rest for 45 minutes at room temperature.  This allows the meat to retain its juices. I wasn’t about to adjust it from its precarious position, so I just opened up the door and let it air out.

Finally, the fast fry.  I brushed some oil onto my bird and brought my oven all the way up as far as it can go: 450F. They say 550F for 7 minutes.  As my bird was already in the oven, it had to go from room temperature to 450F.  It took about 15 minutes before it looked ready.

Just in time, too. The string was burnt up and ready to snap inside of the oven.

But, in the end, there it was: a combi oven roast chicken.  Crispy skin and juicy meat that was already perfectly salted. 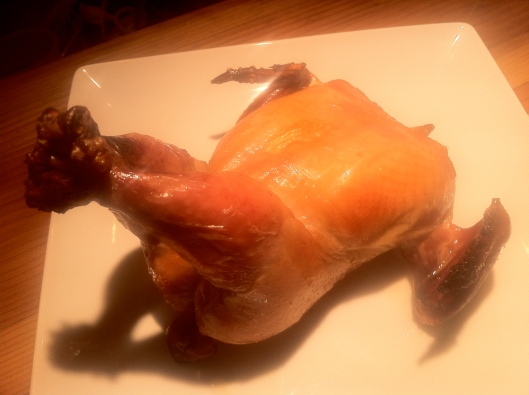 It took a bit of time, but the results were fantastic.  And it turns out that you don’t need an extra $35000 to try it out at home.  Yes! A winner all the way around.