After I tackled the ham and cheese omelet last week from Modernist Cuisine, I was ready for the next step: their infamous striped mushroom omelet.  I had to go online and to four grocery stores to collect the ingredients necessary.  About $75 later I was ready to go.  This had better be a good omelet.

The recipe calls for several preparations: a brown chicken jus, which goes into a mushroom marmalade, a mushroom puree and the omelet base.  A scrambled egg foam was also made, but I ran out of N2O chargers for my cream whipper.  So the sous vide scrambled eggs sit sealed in my refrigerator until I can go to the store and pick some up.  We’ll skip that step.

Chicken jus is simply the rendered juices from chicken meat.To do that I needed to take 1kg of chicken, grind it up, vacuum seal it, and put it in a water bath for an hour.

After an hour, the bag was filled with a chicken loaf surrounded by pure chicken juice.

I snipped off the corner of the bag and drained the jus into a bowl.  It was super hot so I wrapped it in a towel and a kept squeezing the chicken until all the juice – and flavor – was drained out.  I was left with some tasteless chicken dirt.

Not Tasty. Not Delicious.

So why go to all this trouble, anyway?

Using the resulting juice, although more costly than water, is a more flavorful alternative than using water to make broths and sauces.

It’s all about the flavor. I’m on board with that.  OK then.  Now that I had the chicken jus, it was time to create the brown chicken jus.

To do this, I needed both chicken feet and ground chicken wing. I live near an Asian grocery store so the chicken feet was no problem.  I only needed three though, so now I have a dozen feet in the fridge I need to use up.  I’ll need to go online soon and find a good recipe.  The ground chicken wing was simple enough – tear it off and grind it up.  My best friend texted me as I was doing this. The conversation went something like this: 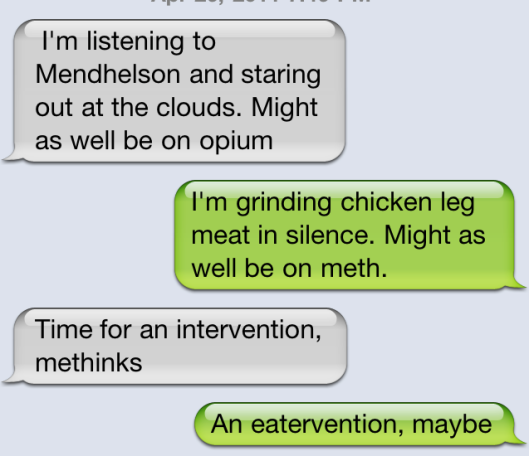 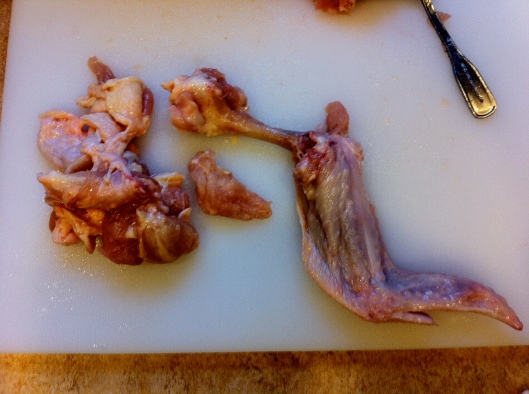 No One Said It Was Going To Be Pretty

I combined the meat and chicken jus with dry fino sherry, shallots, thyme, dried morels and put it in the pressure cooker for an hour.  Afterwards, I strained it and had my brown chicken jus. 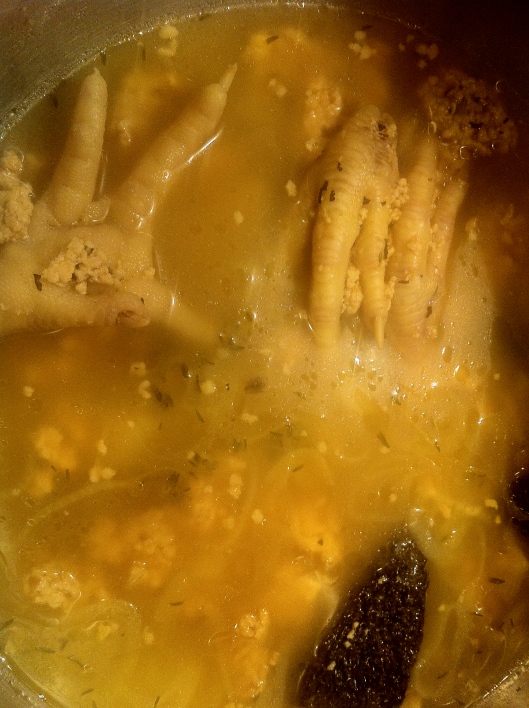 The marmalade was straightforward: saute some porcini mushrooms with shallots in clarified butter for about 25 minutes, add the brown chicken jus, herbs, and season with salt and pepper.  Voila.  Not everything is dipped in liquid nitrogen in the book as some skeptics might think.

Now it was time to start building the omelet itself.  For the brown stripes I needed a mushroom puree.  Having made their purees before, I knew what to expect.  Saute and a spin in the VitaMix.  They suggest porcini, morel, shitaki or chanterelle mushrooms.  I thought why not a combination? 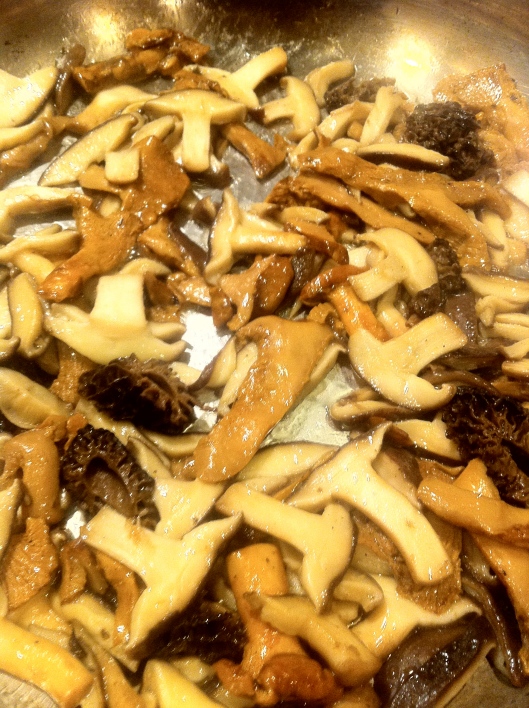 Next I threw in some shallots and the gills of a couple of portabello mushrooms.  The idea behind this is the gills will darken the whole mixture to give the dramatic color contrast against the yellow stripes of the egg.  Clever, these guys are.  After that, I blended it up, pushed it through a sieve, and had a delicious mushroom goop. 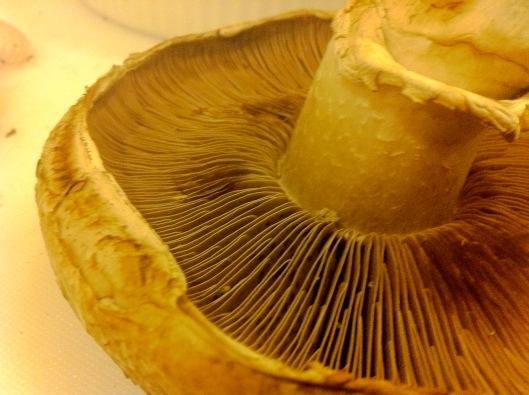 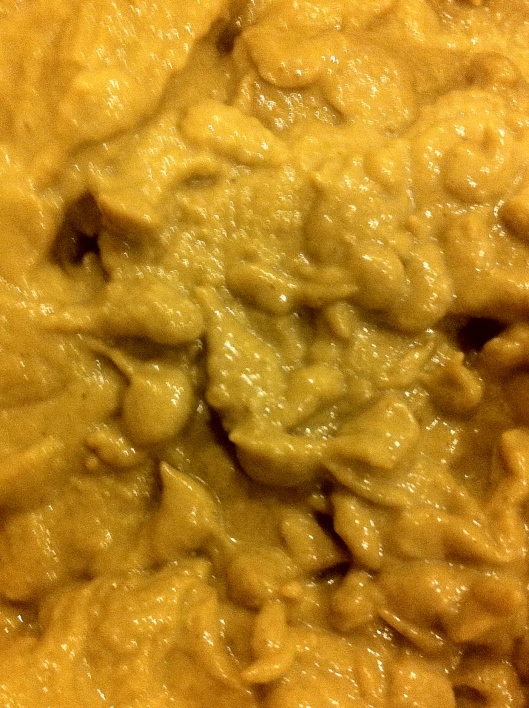 I was now ready to do the modernist twist – striping the omelet.  I took some of the puree and mixed in some egg white powder and egg yolk powder along with some cream.  The reason for this is the mushroom puree will set in the oven like the eggs will, and bind it all together.  I slathered it on a silpat, and drew a pastry comb across it.

This was not that easy.  I think this was because the puree was cold from the refrigerator.  The lines kept breaking so I had to redo it a couple of times to get it right.  I think it would have been easier at room temperature.

After that, I took my egg base (eggs, cream and salt), and poured it over the stripes. I put it in the combi oven for about 5-6 minutes (the book says 3 but mine needed a bit more time to set), and pulled it back out.  My omelet was done. 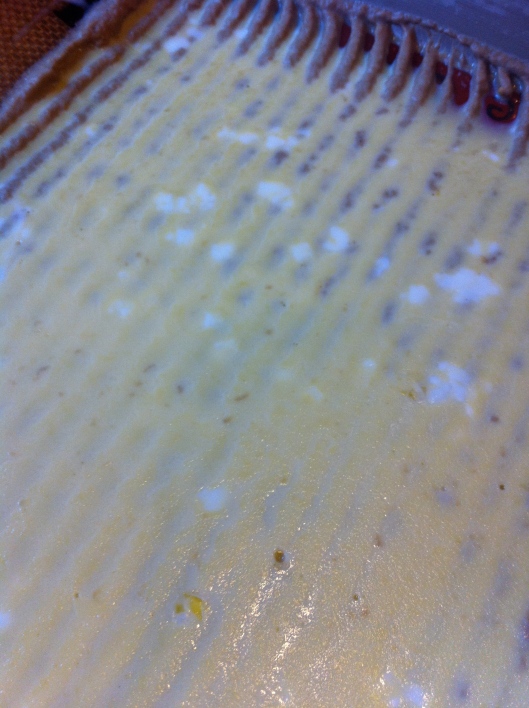 As you can see above, I could have whisked my egg base better, as I had pockets of egg white dapple my omelet.  The hardest part was next: getting it off the silpat.  It was very fragile, and tore easily.  Most of my omelet actually looked more like scraps than High Modern Art. 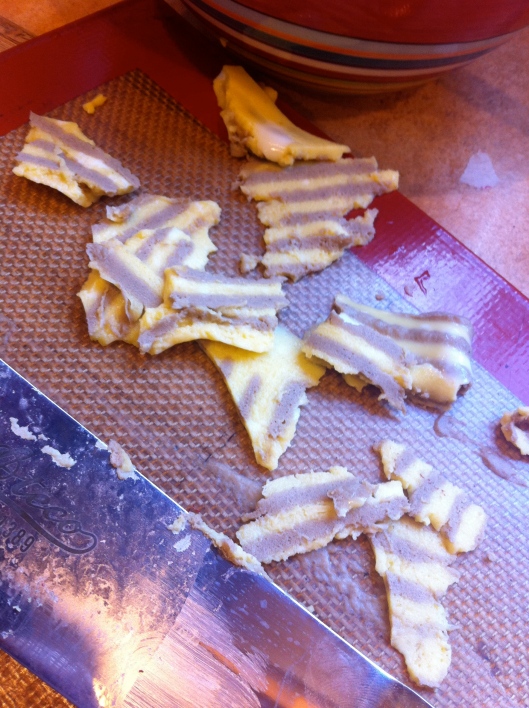 The Completed Dish And Beyond 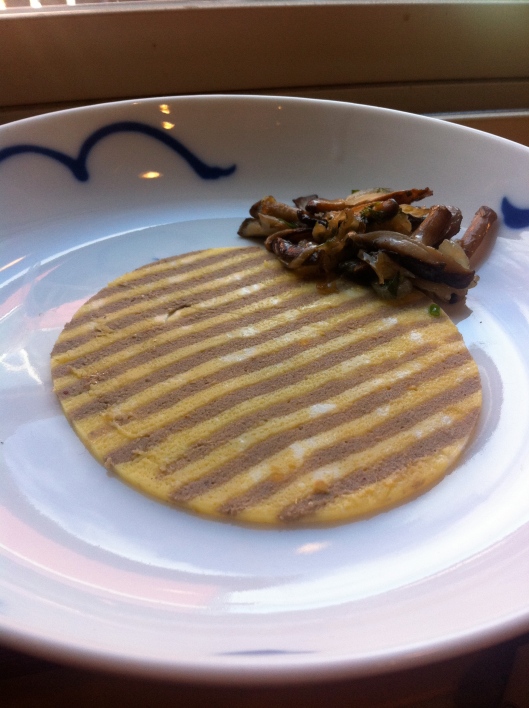 I managed to get a couple of good ones out of it, however.  I added the marmalade on the side, gave it a quick re-steam in the combi oven, and had my first striped omelete.  It was great.  Very earthy and mushroomy.  And once I got the idea down, I decided why not experiment?  How about something with more mushroom?  How about I grab some ham from the fridge and add it to the marmalade?  How about I add a sous vide egg yolk?  Oh yeah. This is fun.  Which is what I consider the whole point of Modernist Cuisine.