The Stadthaus in central Vienna

During my short stay in Vienna, I ate everywhere I could.  I was going to add this in at the bottom of my post about eating at Steirereck, just like I did when I ate in Chicago, but there were a ton of photos in that one and I didn’t want to make it insanely long.  So, this post.

The first thing I was introduced to when I arrived in Vienna was a stand where they sold brats and beer on the side of the road.  And that’s what I had. 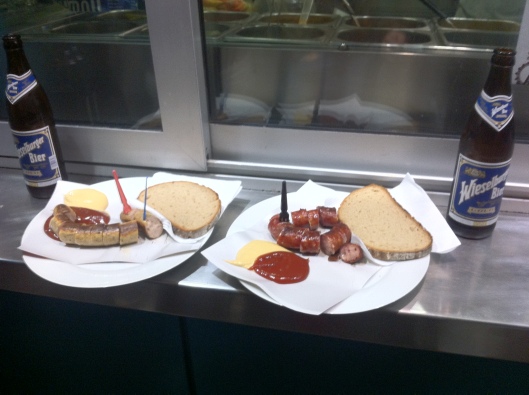 The sausage on the left is called, appropriately, Bratwurst and the sausage on the right is Käsekrainer, which has chunks of cheese in it. My charming hosts told me these stands were the great equalizer of Viennese culture – people of all classes eat at these stands, whether for lunch or the end of a hard day’s work.  It was delicious, for sure.  But nothing prepared me for the bread.

The bread in Vienna is awesome!  My friend put it perfectly:

If you’re going to live here, you have to make some room in your life for bread.

It’s true.  And I did.  One night we went down to the Stadthaus in the center of town.  It had a very large screen set up playing live concert films, while the plaza in front was ringed with food stalls. Thousands of people milled about, getting their fill of cuisines from Austria, Turkey and Iran among others.  We had very traditional dessert called Kaiserschmarrn.

It is, of course, bread.  More specifically, it’s a kind of pancake-type batter that’s cooked and torn up into a big bready mess in a big frying pan. 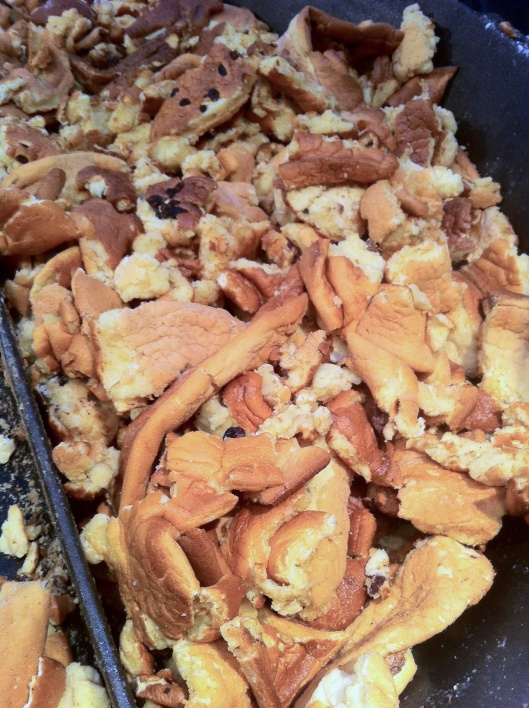 It’s then heaped up on a plate, sprinkled with powered sugar, and served with a huge side of strawberry sauce.

It’s telling that Kaiserschmarrn comes from the word “Kaiser”, meaning “emperor”, and “Schmarrn”, which, according to Wikipedia, “has been translated as a mishmash, a mess, crumbs, a trifle, a nonsense, a fluff, or even as a mild expletive, but should be as ‘smear'”.  Emperor Smear.  A perfect fit.

Another Viennese classic I had was Wiener Schnitzel.  I could get this anywhere, but my friend and I stumbled onto a very local, non-tourist restaurant to have it.

I mean, they have Jagermeister stickers stuck to the wall.  Authentic, I tell you.  And so was the Schnitzel.

At first I was a little amazed.  They had served me a green salad.  I had found it incredibly difficult to find any kind of salad at all in the city.  But, as I picked through the salad, I see they did not disappoint. 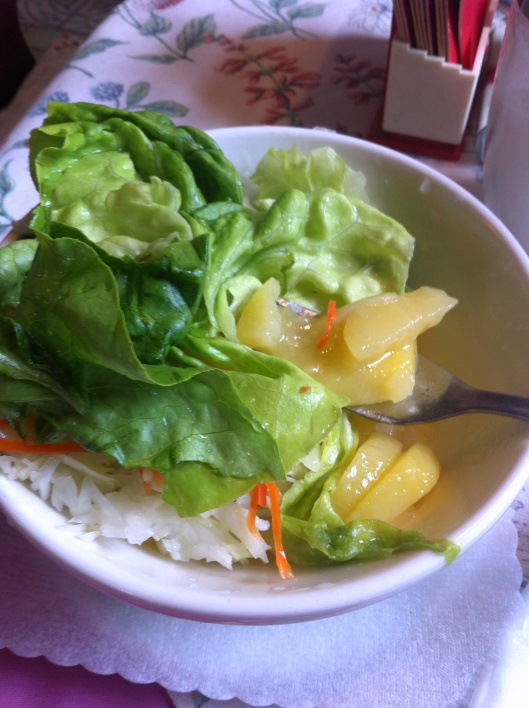 Ah yes, what salad isn’t complete without warm potatoes in it?  It was quite satisfying.

Another thing you have to have in Vienna is coffee.  We found a place with the humorous name of Akrap. Ah crap, that’s good coffee.

They had a great selection of German cookbooks that I had never heard of before.  They also had a little something from Seattle there as well:

1 thought on “Eating In Vienna”