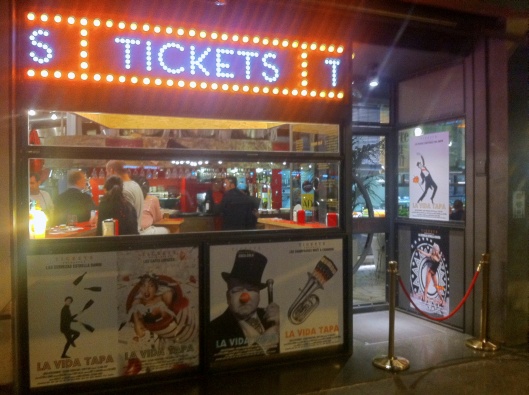 The gastropocalypse continued on from England and Austria into the next country: Spain. Specifically to the culinary paradise of Catalunya, and the beautiful city of Barcelona.  There I had made reservations at a tapas bar.  It doesn’t have any Michelin stars and isn’t in the Top 50 restaurants in the world.  But I thought it was worth checking out.  Why?  Because it’s run by Ferran and Albert Adrià.  You know, elBulli.  Considered the most revolutionary cooks alive and all that.

Excuse me for a moment while I channel Eric’s excitement:

Taking In Tapas At Tickets

First off: this place is FUN.  No stuffiness here.  It’s like a little carnival.  The wait staff wear coattails, bright flashing lights, humorous movie posters.  No dress code, either. A very relaxed atmosphere. 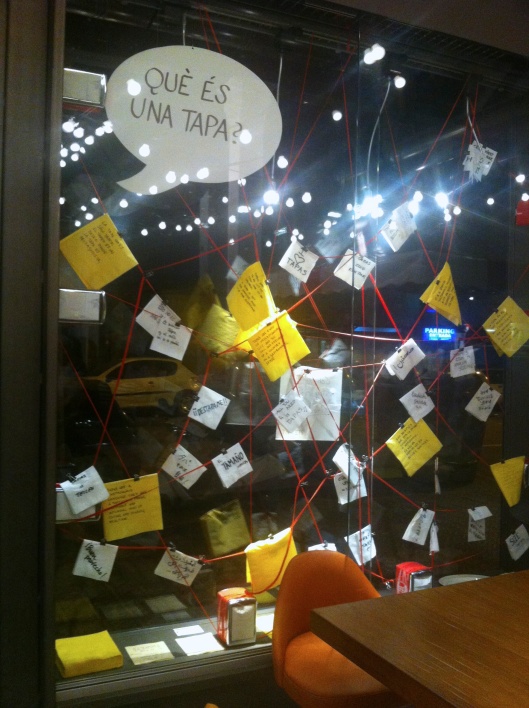 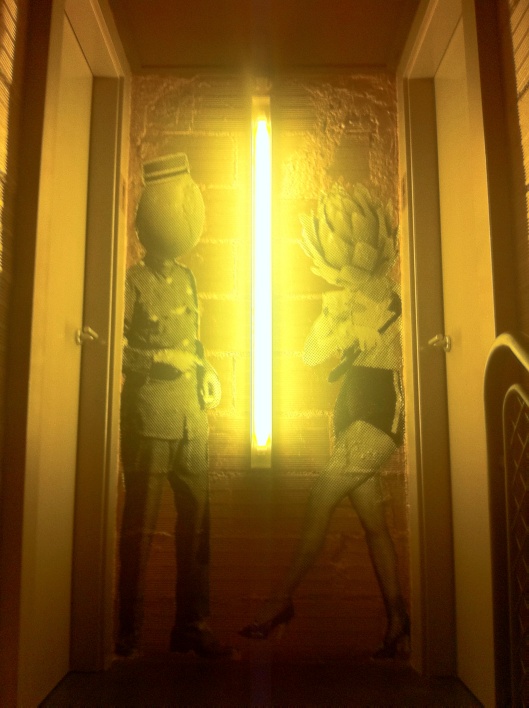 Keeping in the romantic notion I have of eating tapas, I was able to eat at the bar instead of a table. The wall behind the bar is covered with waving Maneki-neko’s and even has flat screen TVs.  The best part?  They had the big game on – Real Madrid v. Barcelona FC.  Life was good indeed.  And the food hadn’t even arrived yet. 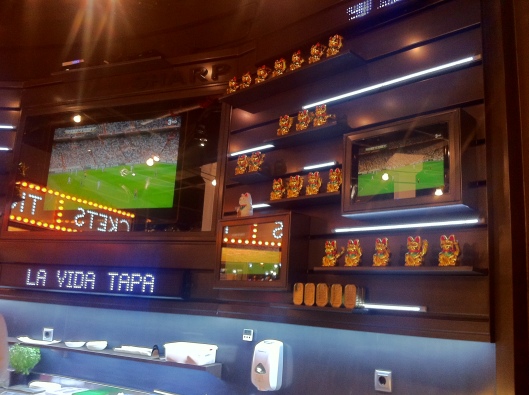 They handed me a menu and returned in a little bit to ask me what I wanted.  I just said to feed me.  So, could I do seven tapas?  Maybe twelve, fifteen even? No. I was able to eat twenty tapas courses before I had to bow out – about half of their menu.  I mean, when’s the next time I’m going to be at Tickets?  This is the gastropocalypse, after all. 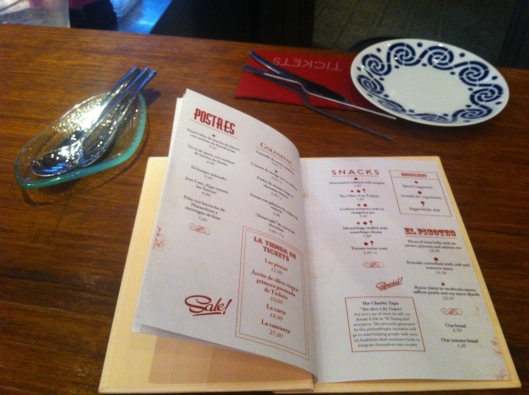 I didn’t get a wide shot, but the “plate” here is actually a wine bottle cut in half.  The plateware varied throughout the evening, as you will see.  But no forks were to be seen the entire meal. Tweezers, though? Why of course.

Ah yes, the legendary spherified olives. What else is there to say? 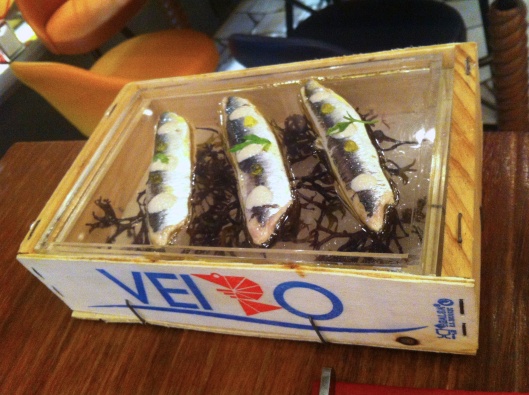 The white anchovie that wanted to be an anchovie

Impossibly thin bread that cracked open to fill the mouth with melted cheese goodness.  I want a bowl of those next to me. Now. 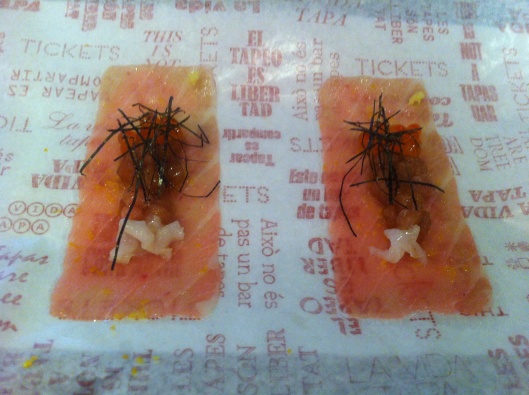 Slices of tuna belly with its tartare, panceta and salmon roe 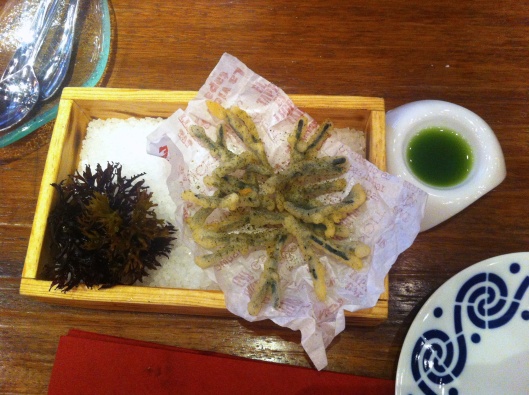 Codium tempura with its vinagrette jus 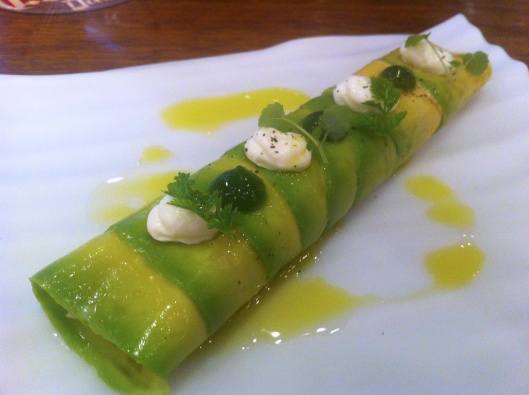 Was as delicious as it looks and sounds. 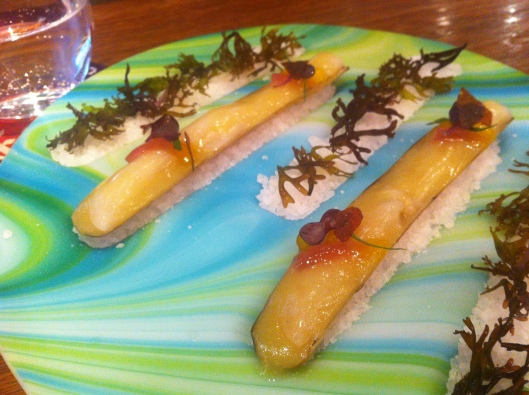 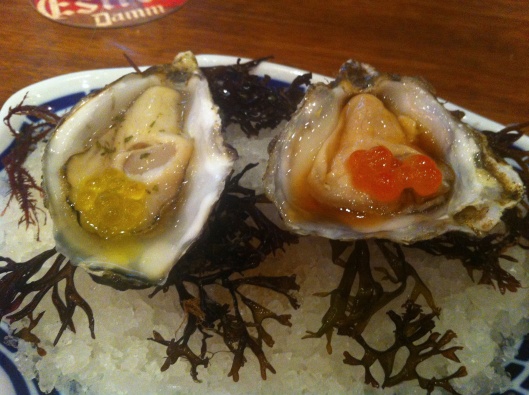 The Oysters #5: one with sherry vinegar, tarragon and olive oil caviar, and the other with oriental vinagrette and salmon roe

I’m not sure what this was. Something yummy and fried served on a slice of tree trunk.

In one of his Spain episodes, Anthony Bourdain found these blindingly good.  Having my judgment totally skewed by his recommendation, I had no choice but to enjoy it with complete and utter abandon. 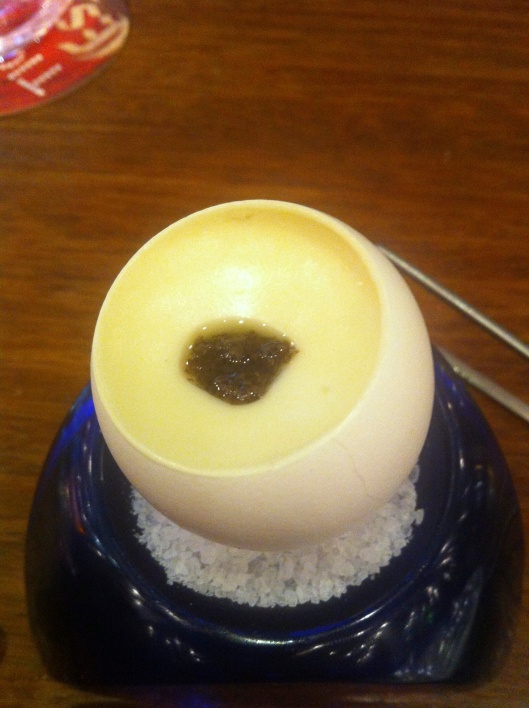 Was this the Iberian shoulder? I don’t know. Was it awesome?  Yes. 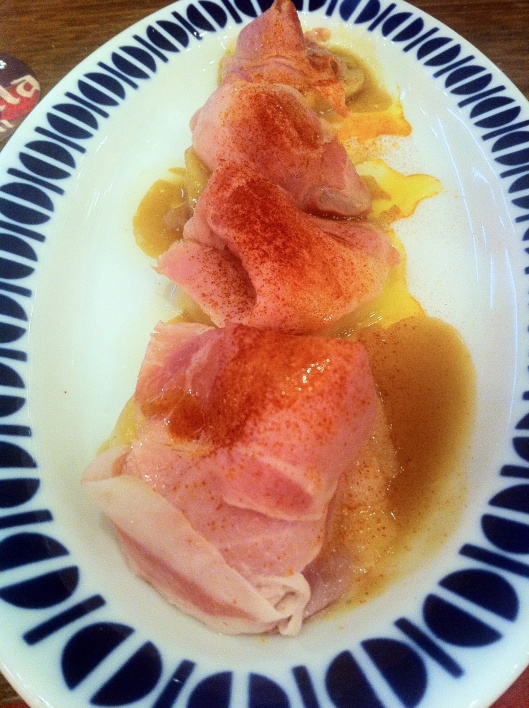 This was pure comfort food, Spanish style.  Rich and mushy and delicious.

They had already asked me once or twice if I was done, but I said to keep it coming.  Finally, they began to wrap me up.  First the cheese course. 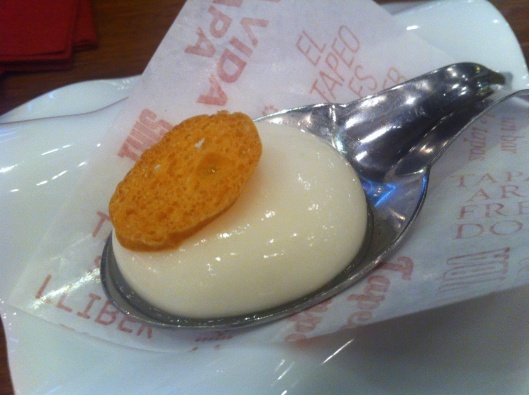 And then they brought by the ice cream cart so they could make my mango ice cream cone in front of me. Interesting how they do something similar at Dinner as well.

I was at course nineteen.  I was absolutely stuffed.  But feeling a bit OCD, I had to put just one more in.  And so I did.  Smart move on my part. 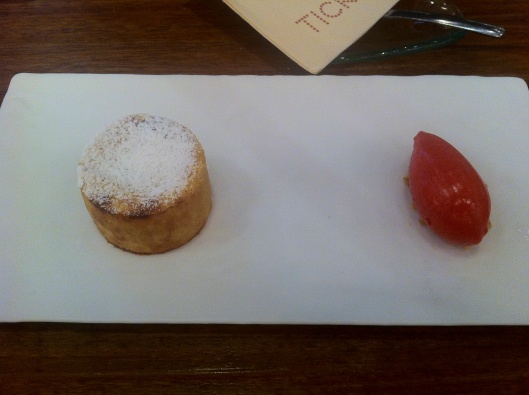 I was so incredibly full, but I had one more goal.  I had to have a drink at 41º, their new high-end restaurant next door.  I knew that after 10pm they opened the bar up to anyone.  I asked if I could check it out, and after a quick consultation they let me in.  Once again, very hip and fun without any of the formal swank you might expect.

The strips hanging from the ceiling were used as a screen to create a psychedelic movie of several overlapping images and films.  I ordered my drink and they, of course, served me a selection of little finger foods to have along with my drink.  I laughed because I had to try them even though I could barely move.

I have to say this is a whole new thing from any other of my high end restaurant experiences. The Adrià’s have cast off the fine dining formalism of their peers and embraced an edgy, whimsical vision of what eating should be like.  It was a fantastic experience and it’ll be interesting to see if the culinary world takes their cues once again from these two brothers from Spain.