I haven’t tackled a big recipe in a while, so it was time to consult The Work and give it a shot.  I was having guests over and thought the Hungarian Beef Goulash from Volume Five would do the trick. And as usual, it was a lot of work and all sorts of unseen problems presented themselves.  From procuring ingredients to equipment breakdowns, timing issues and even a poorly focused camera (as you’ll see – sorry about that), this one barely made it through. But made it through it did.

First rule: read the recipe and carefully map it out.  I did this for Next’s pressed duck, but was winging it a bit for this one (Get it? “Winging” it? Hahaha…yeah.).  That was not a good idea.  It’s amazing what you’ll miss.  For instance, for the beef cheek, which takes three days to cook, you need to make the goulash broth first, which takes four to five hours.  But to make the broth, you need to make the tomato confit first, which takes around five hours.  So you need to start at least 82 hours before your dinner to have the main course ready.  I misread the recipe and started 72 hours earlier.  With other events going on, I wasn’t at home the whole time, so time shrank even more.  But I had already bought the ingredients.  I had to improvise.  So first, the tomato confit.

This was fairly straight forward. Skin the tomatoes, cut them in half and de-seed them, brush on glycerol and olive oil, sprinkle on the herbs and cook low and slow in the oven for a few hours.

Wait. Glycerol?  Why?  Not much explanation in the book.  From what I gather on the web, it helps retain moisture by bonding fat molecules with water.  This would seem to work against the recipe, however, which calls for the tomatoes to be cooked “until deep red and shriveled”.  Even after five hours in the oven, they did retain some of their moisture.  Still not sure if they came out right, but they were going directly into the goulash as a component to flavor the broth anyway, so it wasn’t a huge deal.

The broth was a mix of all sorts of stuff.  Red stuff.  Paprika.  Sherry vinegar.  Red pepper juice.  Slow cooked red onions.  The tomato confit, of course.  My kitchen was redolent of strong flavors (Get it? Yeah.).

Next was to vacuum seal it and cook it sous vide for two and half hours.  But, alas, my circulator, built by master geek Scott, wasn’t working properly.  It would heat the water, then after a bit display ‘ERROR’.  Oh, great.  Luckily, I have a combi oven.  Not as precise as a water bath, but close enough.  In the combi oven it went. 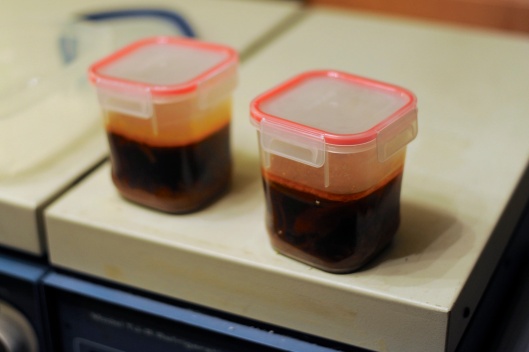 But one of the containers did not.  Yes, another breakdown – this time, one of containers had been spun around too many times and burst open.  Due to the g-force of the spin, however, none of the broth ever left the bucket. There was no goulash gore splattered throughout my centrifuge. I totally lucked out. 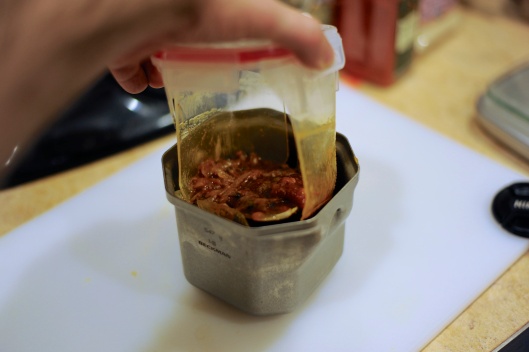 I reserved some fat as required, seasoned the broth, and had that component finished. From there I could make the cheeks, puree and glaze.

I did not use American Waygu beef cheek.  It is impossible to find.  As a matter of fact, beef cheek alone is a task. I called five places, and one had some beef cheek in the freezer. Yay for me – I went into the dark rain of Seattle (it’s been perfect goulash weather around here lately) and grabbed it.  I sealed it up with some broth and into the combi oven it went.  But because I was behind, I could only cook it for about 36 hours instead of 72.  Plenty of time, but still. 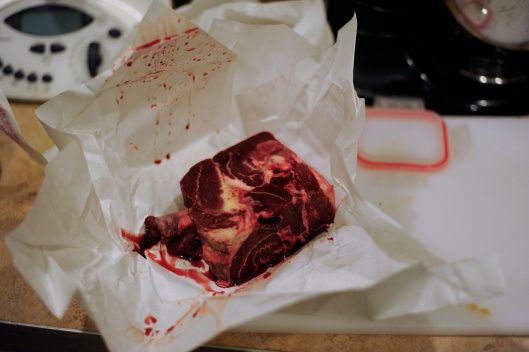 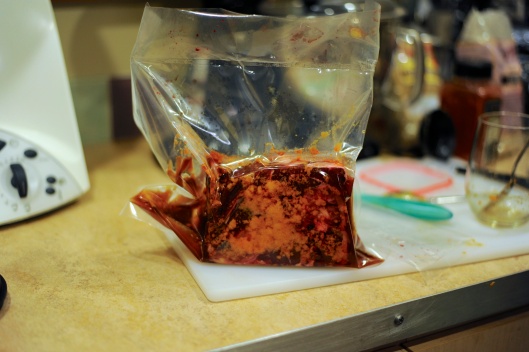 Ooh, an easy one.  Put some broth on the stove and reduce.  I can do that.  I did that. 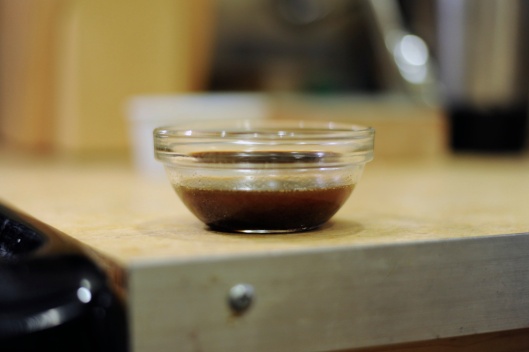 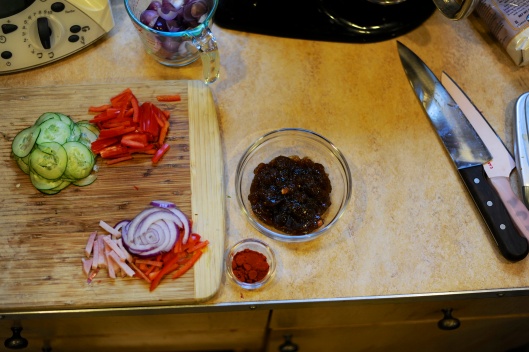 Components For The Puree And Pickled Vegetables

This was also straight forward, except for a little twist.  I prepared the components, sealed them up and put them in the combi oven for a couple of hours.  Afterwards it went for a spin in the Vitamix, passed through a sieve, seasoned the result and ta da – I had a puree.  The recipe then calls for a thickener – Ultra Sperse 5, to be exact.  Of course, I couldn’t find any available for sale.  Gah!  So I looked up the Best Bet for Thick Foams in Modernist Cuisine, and found a substitute – a mixture of agar and xanthan gum.  I did the conversion and added them to the puree.

The prep work continued with more chopping up of vegetables.  The red pearl onions (there’s that color again) needed to be blanched in order to peel the petals apart.  I created the brine next, and after it cooled, vacuum sealed each veggie separately with the brine. 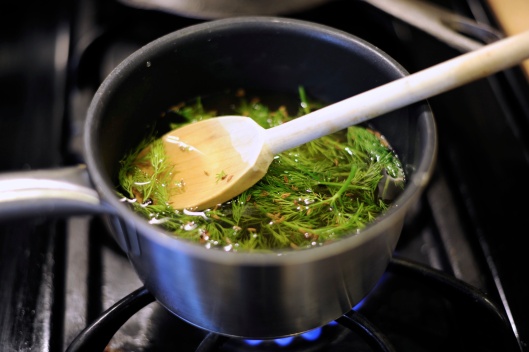 I didn’t end up making this.  Actually, I did, then realized I needed some sort of perforated pan or spaetzle maker to actually create it.  See what happens when you don’t read the recipe carefully?  So, for another time.

The first two components needed to be prepared 12 hours in advance, so I made sure I had it done so I could make it fresh the day of the meal. Which means I made them at two in the morning.

The old rye bread soaker was easy – seal up rye bread with water and throw it in the fridge.  Done.  I know nothing about baking but “Old Rye Bread Soaker” sounds awesome.  Like an old bluegrass song or something.

The other was the sourdough starter.  I mixed the flours, barley malt and yeast up with water and let it ferment overnight (or maybe in this case that’s over-morning). 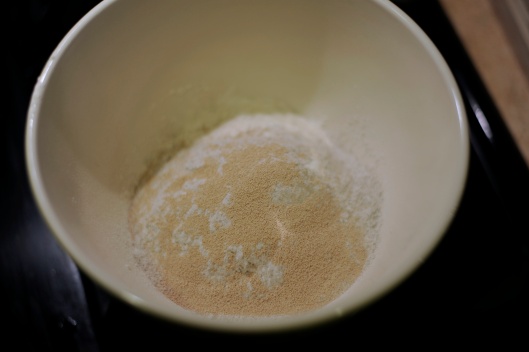 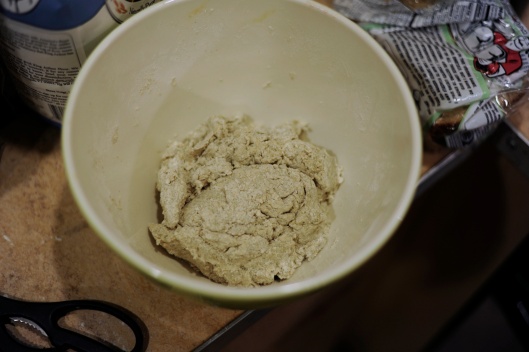 Even though I went to bed late, I got up early because I needed to start on the cooked rye berries, which need to be cooked for five hours.  I looked at the recipe:

What?!  Why do they have a direction over on the left side of the recipe where the ingredients are?  “Soak for 12h” should be the first step on the right side.  I guess I DIDN’T READ THE RECIPE CLOSELY.  Ah man.  I ended up soaking them for 5 hours before cooking them in the combi oven for 3 1/2 hours.  Hopefully it wouldn’t ruin it.

The molasses meal was good to go, though.  I took my soaker and starter and combined them with molasses.  A good looking bread goop, I tell you.

Putting It All Together

Once the rye berries were cooked, I combined it with the rye molasses meal, flour, salt and ‘rye chops’ – chopped raw rye berries.  A lot of them.  Kinda weird but OK.  I let it ferment for 90 minutes, sprinkled black sesame and sunflower seeds on top, and put it in the oven.

After two and a half hours, it came out…OK. 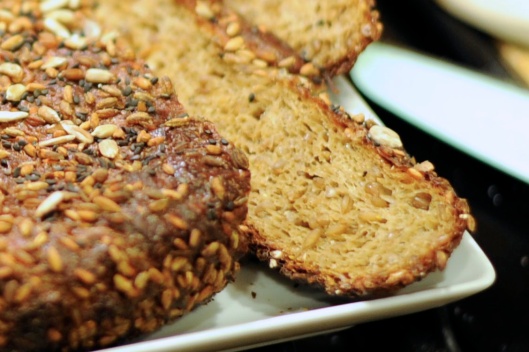 It wasn’t very fluffy – I guess it didn’t rise that well when fermenting.  Also, the raw rye berries kind of ruined it – they were so hard and chewy, and there were so many of them.  There isn’t any correction for it on the Corrections and Clarifications page, but it can’t be right. Maybe the rye chops were supposed to be cooked as well, but it was separate from the cooked rye berries in the recipe.  I don’t know. A guest suggested I could hang it on a wire outside and feed it to the local birds.  Aren’t dinner guests lovely like that?

Anyway, I made it happen.  I separated the beef cheek into six pieces. You’re supposed to slice it but it just fell apart when I pulled it out of the bag – I guess 36 hours was enough.  I put the goulash glaze on each one.  I put down a blob of puree on a shallow bowl, put the glazed beef cheek on top, and placed the pickled veggies on the side.  I then poured the remaining broth table side.  Of course, the recipe was for four, and I had six people, so my dish didn’t have enough broth.  But the flavor was still there – rich and delicious.  It was enjoyed by all, and only I knew the craziness it took to get it there on the plate.  But next time I’m reading the recipe out loud to myself before I start with a pen and paper at hand to take notes.  That was too crazy.

A Bit Brothless, A Lot Delicious