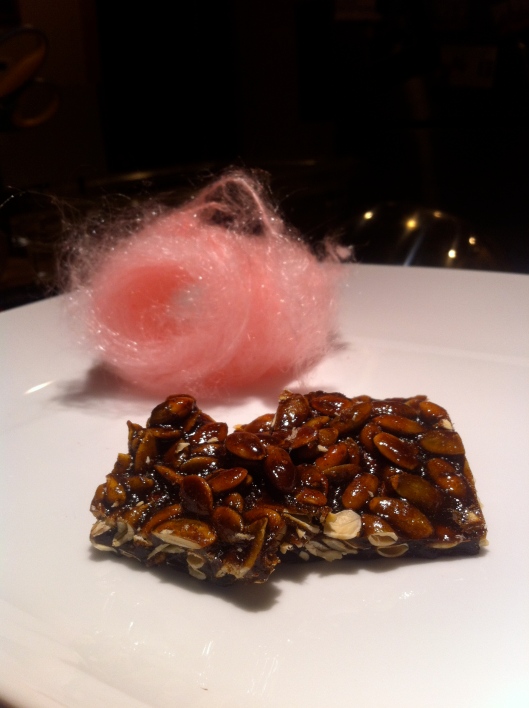 I threw a little holiday dinner party the other night where a guest had one request: “I want some godly gourmet goodies like you’ve been posting”.  Fair enough.  I started with a caramelized butternut squash soup (centrifuge, pressure cooker), a steak version of the Thanksgiving Stew from Modernist Cuisine (sous vide), and finally, dessert: gingerbread pumpkin seed brittle and candy cane cotton candy.  Where did I get that recipe?  I made it up!

I don’t do my own recipes here but it was so addictive and delicious that I wanted to share with you all how to make your own.  I’m going to go for a more conversational style in the manner of Fannie Farmer and Escoffier.  Why?  Because I kinda winged it, and so the recipe should reflect that.

It’s pretty straightforward.  I started off with the basic recipe from the excellent Momofuku Milk Bar

cookbook: melt a cup of sugar, add a cup of pumpkin seeds, and spread out on a cookie sheet to cool.  But after that I made some variations.  First, I lightly toasted the pumpkin seeds until they were brown and began to make cracking sounds.  I then substituted half a cup of sugar with a quarter cup of molasses and a quarter cup of brown sugar.  To the other half cup of sugar I mixed in a half a teaspoon each of the following spices: cinnamon, cloves, ginger and nutmeg.

OK, I thought, this is cool.  I had already had the pan on the heat when I was adding the spices, so the pan was very hot.  Probably not a good idea.  I first put in the molasses and it began to bubble immediately.  Whoa – don’t want to scorch the thing right at the start!  I turned down the heat and pulled the pan off so it would cool down a bit.

I put the pan back on and added the half cup of sugar, which dissolved in the molasses immediately.  When it’s just the sugar itself, it takes a few minutes to melt completely, so I didn’t know if this was good or not.  I then added the brown sugar in, stirring the whole time and wondering when it was done.  It all looked liquid, but it all happened so quickly that I thought maybe it still needed a little time to melt.  After maybe a minute I threw in the seeds, coated them in the sugary concoction, and spread it out on a cookie sheet with a silicon spatula.  I let it cool down, and it was complete.  I somehow managed not to burn the spices or destroy the seeds or flavor or anything.  I’m making the transition from recipe reader to cook, I suppose.

But I am still in transition. One major difference is the molasses doesn’t get hard, so you need to stick it the freezer for a bit to get it to break off the cookie sheet easily.  And as it warms up to room temperature, the molasses sticks the brittle to the plate and it becomes chewy (but not unpleasantly so).  I’m sure with the right proportion that can be mitigated without distorting the flavor too much.

and dropped in some broken pieces of candy cane.  Boom – sweet holiday floss!

So I was ready to give my guest a kick ass holiday meal.  Then they got sick and cancelled.  Bah humbug! More candy for me, and trust me, I took advantage.

If you’re up for it, give it a shot and make your friends get all excited about your skillz.