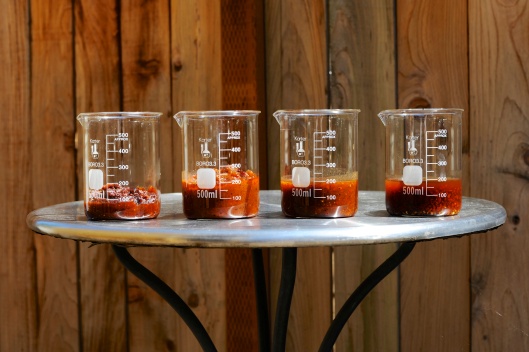 I was going to a summer BBQ and thought it would be nice to bring a variety of sauces for people to pick and choose.  Nathan Myhrvold has a special passion for BBQ, having won first place in the barbeque world championships in Memphis, Tennessee.  There are eight recipes in the book (not to mention a two page regional map of the different varieties throughout the American south). I chose to do half of them: Kansas City, Memphis, North Carolina (Eastern Region), and North Carolina (Lexington Style). 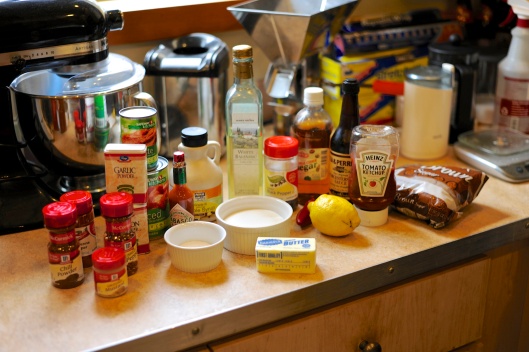 The science of BBQ is all about smoking the meat.  This post is not about that.  This is about the sauce.  The main science in BBQ sauce making? Reduction.  No, this is nothing crazy.  Well, maybe crazy delicious.

Each recipe had three steps:

See? How approachable is that?  Very. 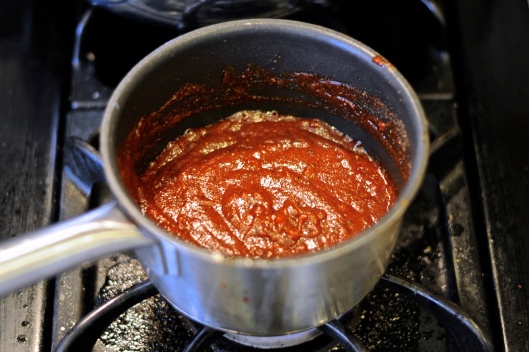 The quantities in the recipe are exact as always, so I followed right along, adjusting as I felt it warranted for my palate. 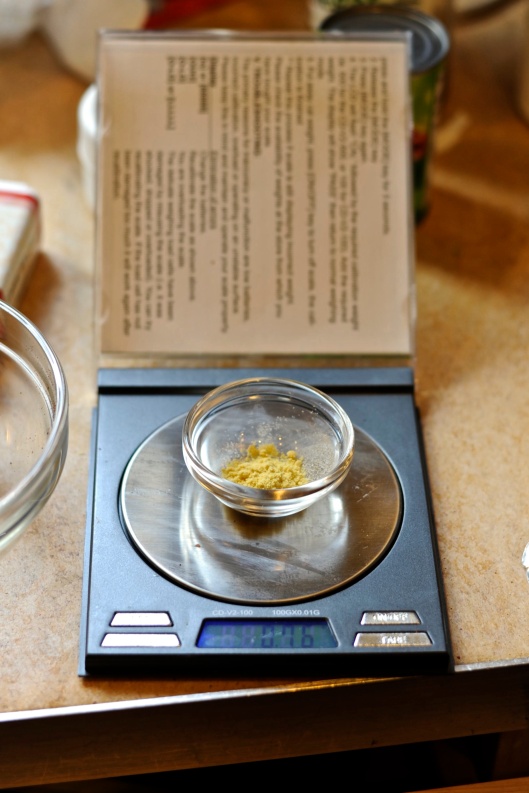 My pepper grinder broke, so I had to abandon all modernist convenience and go totally old school to get it prepared. 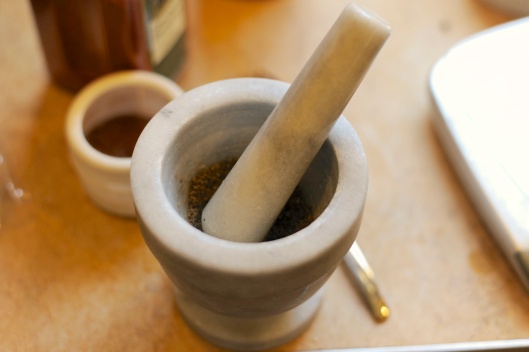 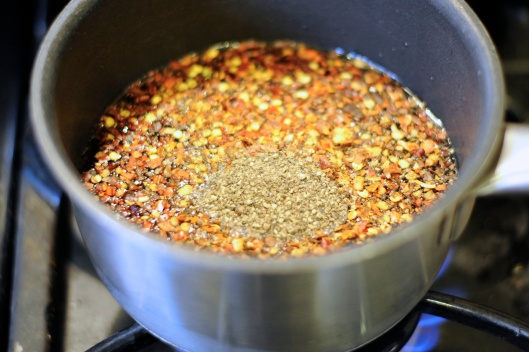 The last step seemed to go against their advice.  Putting hot food in the refrigerator brings up the temperature of everything else in there, causing the possibility of spoilage and taking more energy – and money – to cool the refrigerator back down.  But the recipe doesn’t say “cool then refrigerate”.  So, what to do?  Oh, that’s right, I have a blast chiller.  A little modern convenience never hurt anyone.

So after a couple of hours I had my sauces ready to go. 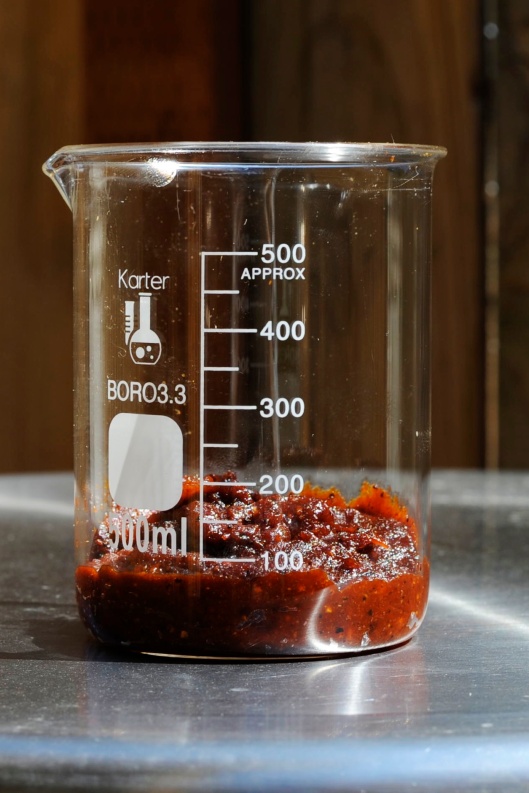 Thick from tomato paste and ketchup, this had a little extra zing with ginger and cumin. 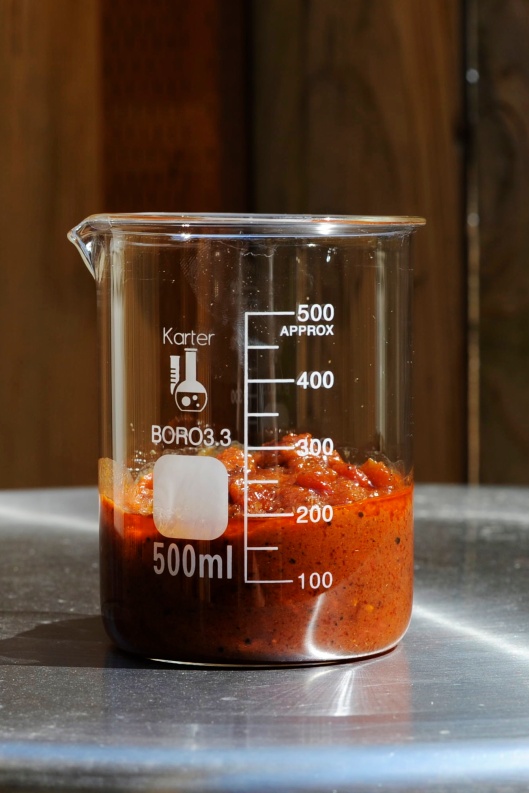 This one used canned tomatoes to give it a nice chunky texture and used cider vinegar instead of white wine vinegar for the Kansas City.

This had no tomato at all, but had both cider and white wine vinegars, in addition to chili flakes.  Sharp and very spicy. 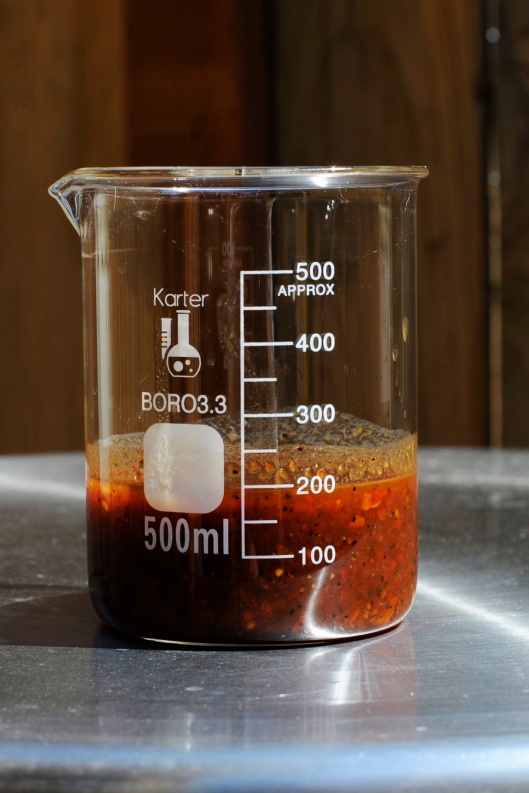 This was the same as the Eastern Style, but with the addition of ketchup to mellow it out a bit.

Chowin’ down the ‘Q

They were a big hit, with people being creative and mixing the sauces together and generally enjoying a buffet style of BBQ flavors.  A perfect compliment to an outdoor meal in the sun.

Ultimately, Modernist Cuisine is all about flavor, taste and enjoyment.  The scientific side of it is just the vehicle to get you there.  And, sure enough, some recipes in the book aren’t “modernisty” at all – no additives, no special equipment, no multi-day preparations.  Just delicious food to share with good people.  And that’s not modern, that’s ancient.  And that’s all right by me. 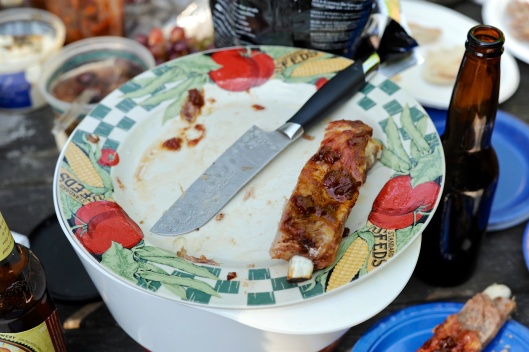