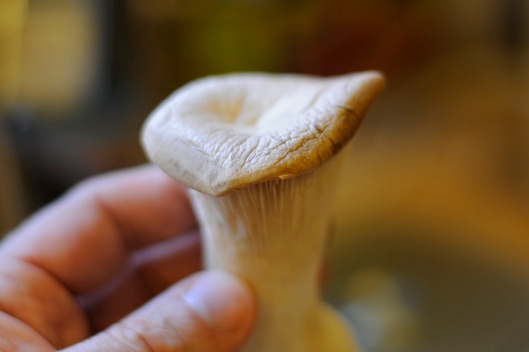 I had quite a bit of BBQ sauce from the barbeque I went to last week.  I even brought it to another barbeque, but still had leftovers.  What to do?  A quick look in the book and I found a recipe that uses the sauces: pulled mushrooms.  It’s like spaghetti marinara except they’re mushroom noodles in BBQ sauce.  Why of course it’s like that.  Plus the recipe was inspired by Ideas In Food.  Since I had recently met Alex over at Scott’s a few weeks back, it seemed fortuitous.  Time to head to the Asian grocery store.

The concept is based on what is called “trompe l’oeil” or “deceive the eye”, which is based on tricking the eye to see a forced perspective in painting.  Nowadays it is popularized in crazy 3D sidewalk chalk art. In food, the idea is to make something look like something else.  For instance, it’s pasta.  No, it’s mushrooms.  How do we do this? Let’s follow the recipe.

I went and bought trumpet royale mushrooms, vacuum sealed them with olive oil, and let them cook sous vide for four hours at 90C.

Afterward, I drained the bag and let them cool on a paper towel.  From there, I began to pull apart the mushrooms by hand, where they came apart somewhat like string cheese.

After a bit of good old fashioned prep work, I had a pile of mushroom noodles.  I mixed it up with my BBQ sauce, and – voilà – I had my ‘spaghetti’. 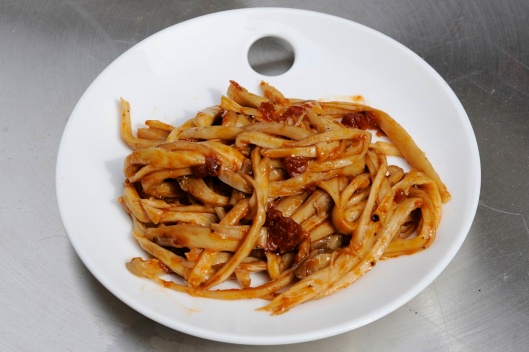 The mushrooms have an al dente kind of bite to them, a noodle like texture, and was a pretty good illusion over all.  I’m sure I could fool someone if I tried.

The recipe also suggested enoki mushrooms as an alternative.  Why not do both?  I grabbed some enoki, removed the caps, and put them in sous vide for 90 minutes.

You would think these would be easier to make spaghetti out of, and you would be wrong.  They stuck together, and I spent as much time separating them to make them noodle-like.  But once I did, I mixed in the sauce and had another fine plate of spaghetti.  If I had some mozzarella on hand, the illusion would have been complete. 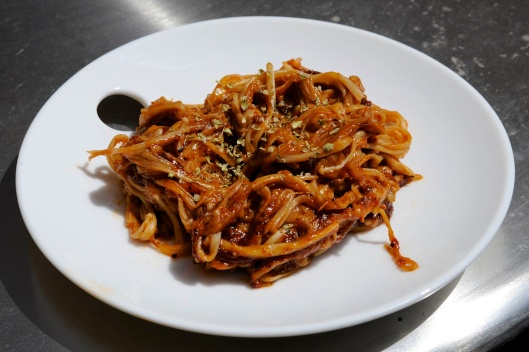 The texture of this plate was more like overcooked mushy pasta, which can be quite delicious if that’s the mouthfeel you’re going for.  And it was good by me (I suppose it reminded me of having SpaghettiOs as a kid). I think this would be a nice course to start a meal – a ‘fungipasti’, at it were.  It certainly is a great way to eat up the rest of your BBQ.