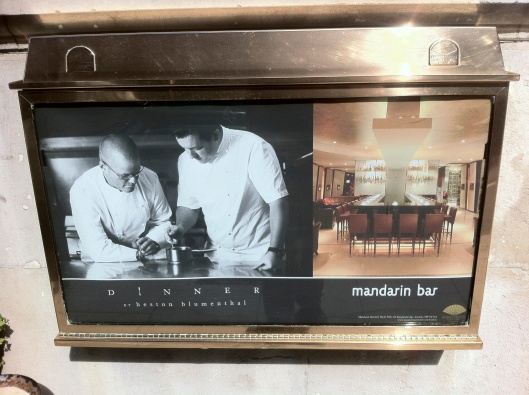 I just came back from a two week jaunt through Europe.  I hadn’t been on a two week vacation in over two and a half years, and hadn’t been to Europe in six years, so I was determined to pack in as much excitement as I could.  And boy, did I.  I decided one aspect of this vacation was to be a culinary exploration, and I managed to score reservations at some of the best places on the continent.  I named the whole excursion Gastropocalypse 2012.  The first stop on the culinary map: London.

Dinner by Heston Blumenthal is located in the Mandarin Oriental Hotel in Hyde Park, and opened in January 2011.  The idea behind it is to recreate, or at least riff on, historical British dishes.  Although it has Chef Blumenthal’s name on it, it is run by Ashley Palmer-Watts, who started at the Fat Duck back in 1999. 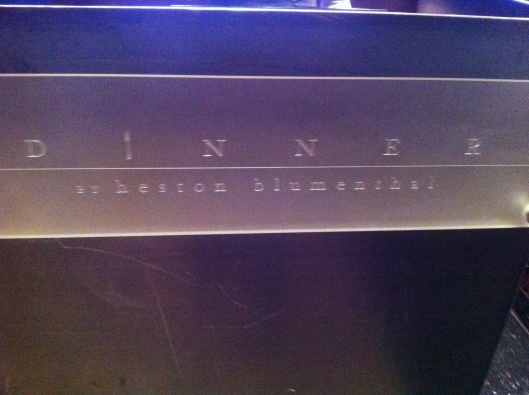 I managed to get two reservations online using their OpenTable system for noon on a Sunday.  No strings were pulled or anything else, I just made straight up reservations.  I didn’t have anyone to go with, but with the power of Facebook, managed to find a very cool guy named Anthony to join me.  He and his wife had just bought a house and he was planning to use the detached garage as his experimental kitchen laboratory.  My kind of guy.

The menu is divided up into three sections: starters, main courses, and desserts.  I proposed that we order three from each and share.  He was game, so we went through, picked out the dishes, and enjoyed a nine course meal. 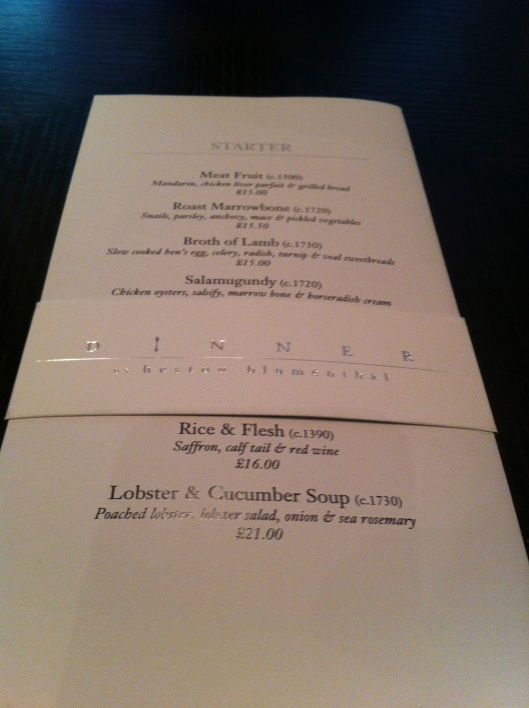 OK, let’s get to the beautiful cell phone photos. 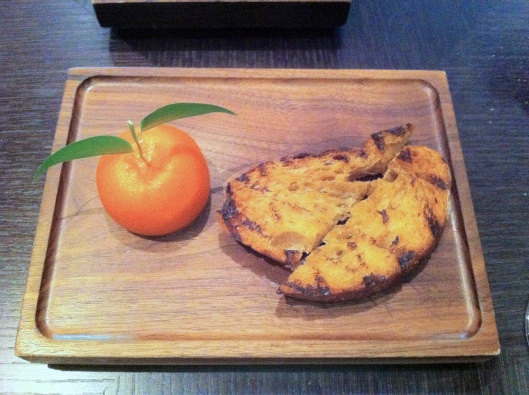 Oh man!  C’mon, this is the coolest thing for a reason.  I mean, look at it – it’s a frickin’ orange.  No it’s not.  It’s chicken liver. Heston being all Heston-y. Or maybe all Palmer-Watts-ish.  But, you know. 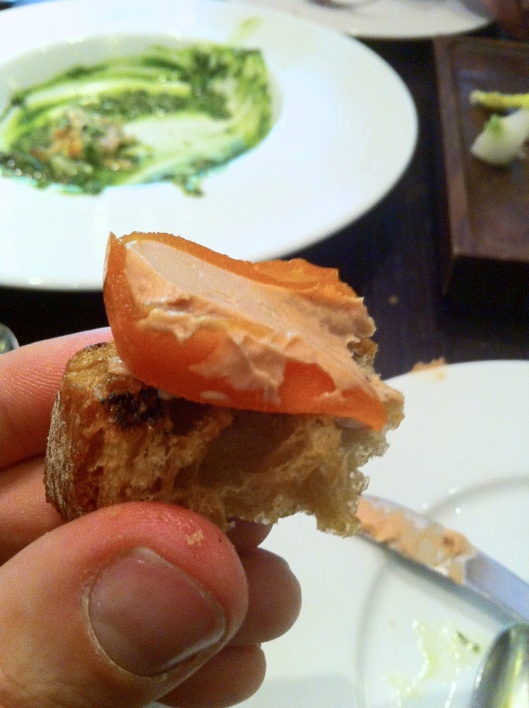 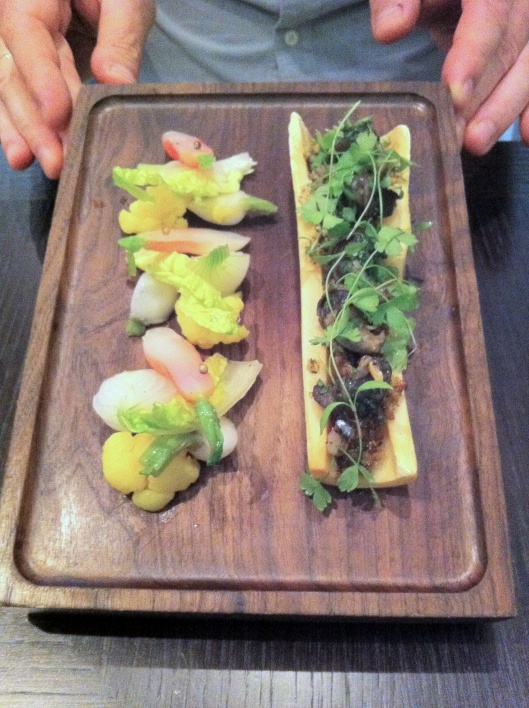 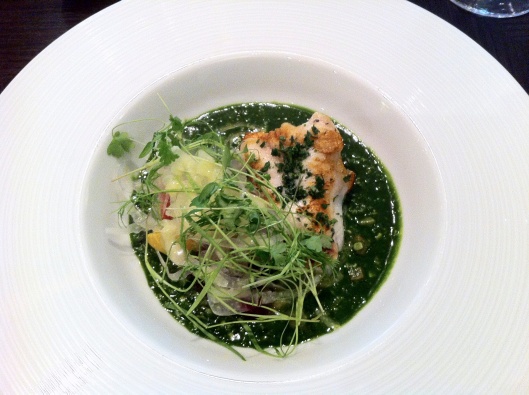 This was actual porridge – it had oats in that sea of green.  It worked. 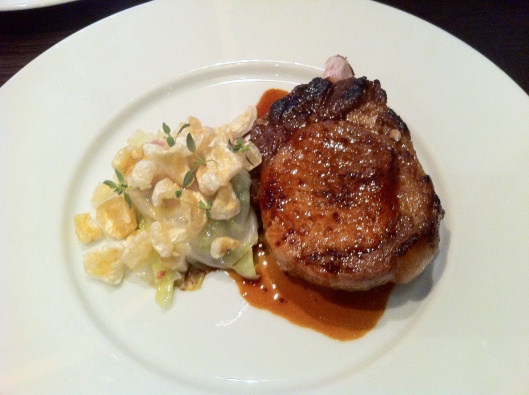 That popped corn looking stuff on the left is puffed pork skin.  Delicious. 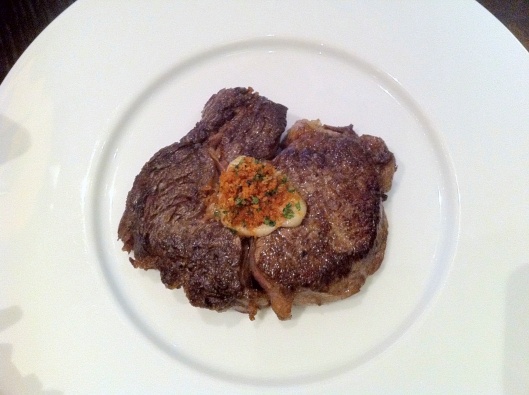 And what does any steak come with? Frites.  Triple cooked frites, in this case: 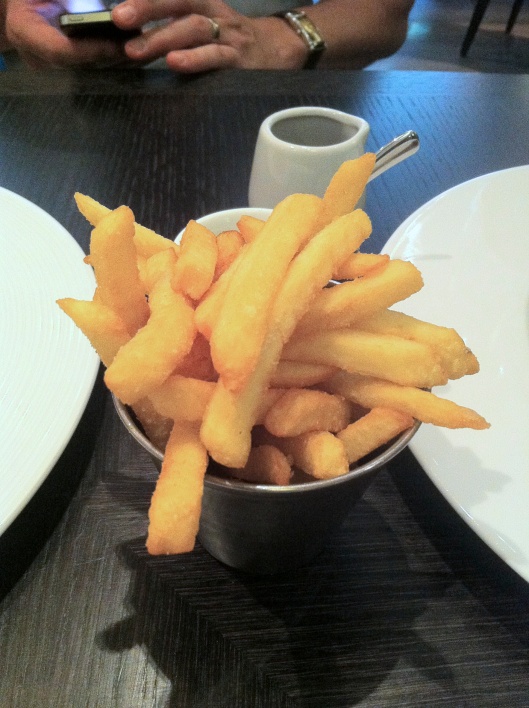 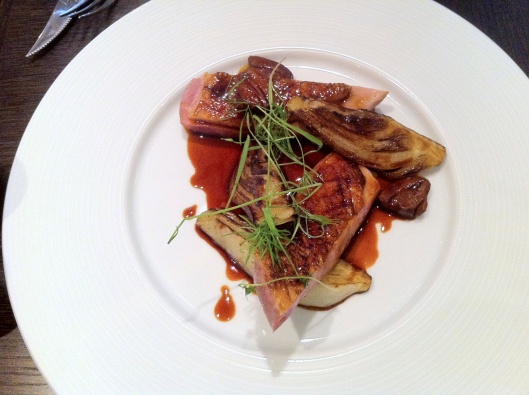 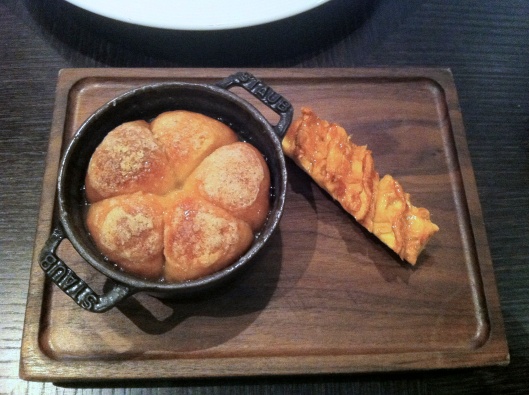 Arrrghhh….that was so good.  It was like a creamy warm doughnut.  The roasted pineapple on the side was sweet and killer too. 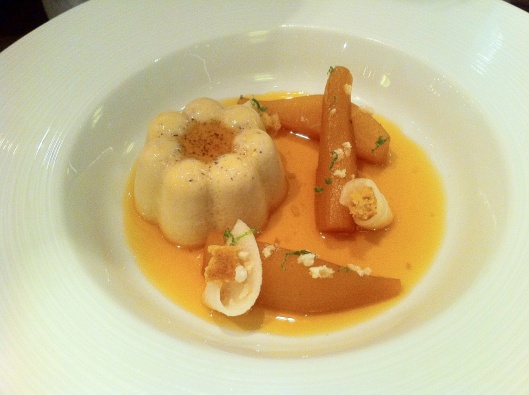 The most interesting thing about this dish was the pear.  It was seasoned in a really complex way.  It was one of those where you close your eyes and slowly taste it to let the flavors develop on your tongue. I’m still confused about it (in a great way). 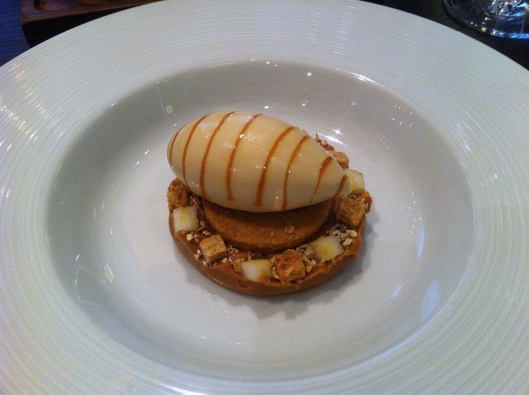 Do you like brown butter and sugar?  That’s what it tastes like.  But with textures: cold creamy, sticky chewy and crumbly crunchy.  What’s not to like?

They then brought us an extra course.  I have no idea why.  Who am I to question their generosity?  It was a thick chocolate mousse with a caraway cracker. I unsurprisingly thought the cracker tasted like rye, which caraway is used in. Chocolate and rye – something I would have never thought of.  It worked together beautifully. 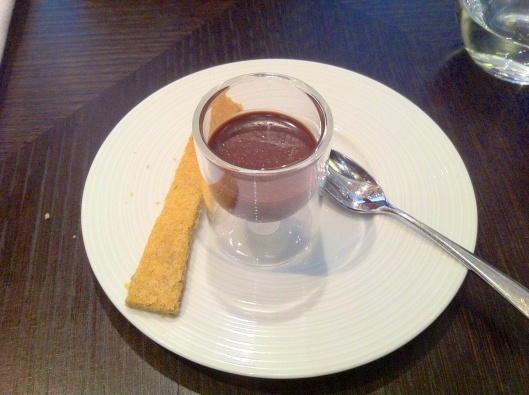 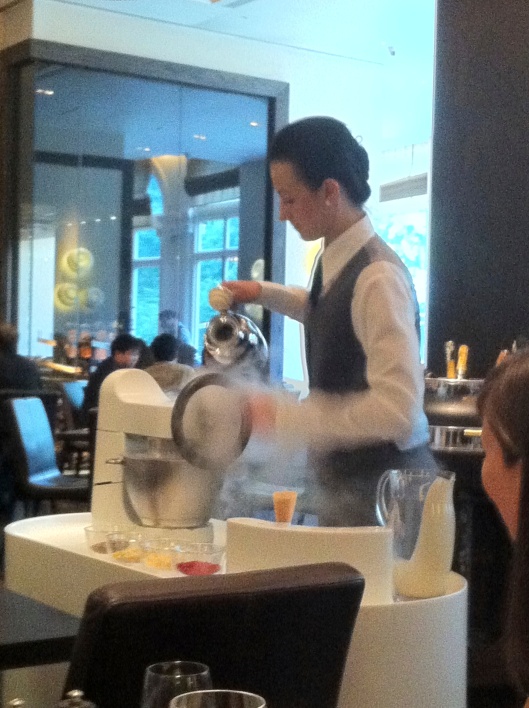 They had some entertainment next to us: ice cream cones made table side with liquid nitrogen and a hand cranked mixer.  Very much a crowd pleaser.  It’s times like these where I wish I was a little less knowledgeable.  Having worked with liquid nitrogen quite a bit at home, I couldn’t muster the awe and fascination they other guests had.  Ah, to be young again…

We left with our bellies full and smiles on our faces.  Anthony headed home and I headed directly to the airport, off to my next destination.  The Gastropocalypse had begun. 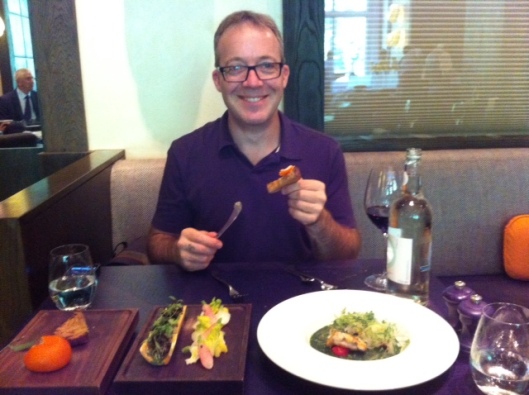