“Modernist Cuisine” is not for most home cooks.
– Michael Ruhlman

“[Modernist Cuisine] looks cool and would be fun to flip through,” he said. “But I don’t need to spend six hundred dollars on a cookbook — I already know how to cook.” This led to my next question — in his opinion, were these techniques even appropriate for the home cook? “Sous vide is great for cooking vegetables and meat,” he replied. “But home-cooked meals are home-cooked for a reason. They’re meant for the home.”
– Domestic Divas

The truth is that this stuff is for the pros.
– New Yorker

Man, do these people bore me.  How uninspired. How defeatist.  How sad, pathetic, and totally lame.

I started to cook in December 2009 – about 18 months ago.  I had no knife skills, didn’t know anything about Anthony Bourdain or Iron Chef, much less Mugaritz.  My refrigerator was empty save for old condiments.  I didn’t even notice the front right burner on my stove was larger than the others because I had never used it.

But once I started, I got way into it.  Within weeks, I had discovered avant-garde food.  By February 2010, I had ordered my first ‘molecular gastronomy’ kit and contacted Scott and Eric to form Jet City Gastrophysics. By March, I spherified my first liquids.  By August, I made the red cabbage gazpacho from The Fat Duck. And in October, just 10 months later, I began cooking from Modernist Cuisine, which wasn’t to be published for another five months.  I used their PDF excerpt.

END_OF_DOCUMENT_TOKEN_TO_BE_REPLACED

It turns out that I am an excellent product tester.

Now, in my past, I have done some software testing, so I know a few things about pushing just that right combination of buttons that will make everything crash, mystifying the developers.  Turns out it’s not just software I’m good at breaking.

My sous vide, in better days

I am proud to say I was the first customer for Scott’s incredible DIY Immersion Circulator.  To be able to afford one of these, and have it sitting in your kitchen, ready to go – there’s just this incredible feeling of excitement and possibilities.  I  went down to Dick’s Restaurant Supply, grabbed a container, and proceeded to screw the circulator onto it so I could start cooking. 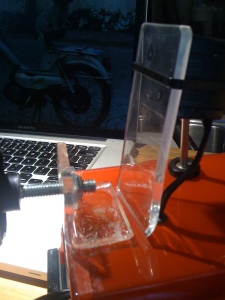 I immediately broke it.  Not really aware of the pressure I was applying while screwing it on, the lucite tub grip snapped in half.  I really should have been paying more attention.  But, undaunted, I went to Lowe’s and picked up some hearty brand of plastic glue so I could put the pieces back together and continue on my merry way of sous-viding (can I use sous vide like that?  Eh.).

Unfortunately, the glue didn’t hold so I had to break the news (pun intended) to Scott to see if he could help me out.  Needless to say, he was, oh, impressed at my ability to render it useless so quickly.  But being the stand up guy that he is, he took it back and lovingly crafted another for me.

I was in sous vide heaven.  Perfectly cooked steaks, creamy egg yolks, incredibly tender leg of lamb – everything they say is true.  Sous vide cooking IS different and IS amazing.  I wondered how I ever got by without my little water oven sitting on my counter top.

After a particularly fun meeting of Jet City Gastrophysics, Eric generously offered me some Mangalitsa neck he had in his freezer.  I had recently seen a recipe from The Herbfarm for doing it sous vide on the Wooly Pig’s blog: sous vide at 165F for 14 hours.  Scott has done ribs for 72 hours, so I know the circulator can handle 14.  The key is to never let the heating coils sit completely out of water, or they will burn out quickly.  That was easily accomplished by filling the tub up to the rim. So I took the neck, seasoned her up, vacuum sealed the bag, and dropped it in the warm bath that would render her delicious.

And I went to bed.

7 1/2 hours later, I woke up to an acrid plastic smell.  They’re currently doing construction nearby so I thought to myself in my pre-caffeinated state “What are they welding over there? That smells awful”.  Then I remembered I was cooking.

I leapt out of bed and bounded down the stairs, visions of fiery destruction blinding me.  The kitchen was intact, and there was no smoke, but there was my second immersion circulator, melting into the tub now 3/4 filled with water.

It seems as though enough water had evaporated so the upper half of the coils were exposed.  Since they were partially submerged, they didn’t burn out.  They just radiated heat on the plastic above them, perhaps for hours.  As the plastic melted, the box bent forward and the aquarium pump touched the coils, melting it against them.  Full on destruction.  Luckily, the house was fine, so as far as I was concerned, I dodged a bullet.  The smell of burnt plastic did permeate the house, so I opened all the windows and doors to get things back to normal.

I had to contact Scott again.  This time he was even more impressed with my abilities.  Now, let it be said, these are perfectly fine machines, actually fantastic machines, and he’s run his for hours at a go without a hitch.  Others have used his ingenious design without any problems as well.  And then there’s me.  I’d like to think I’m spurring further innovation in the field of culinary science.  And indeed, Scott is perfecting a Jethro-proof design so even I can cook sous vide.

Which brings me back to the Mangalitsa neck.  Luckily, the bag it was in never touched the coils, so it was intact.  I’m not sure what temperature the water was at by the time I pulled it out, but it had been cooking for around 7 1/2 hours.  Maybe not the Herbfarm, but long enough to salvage the thing: 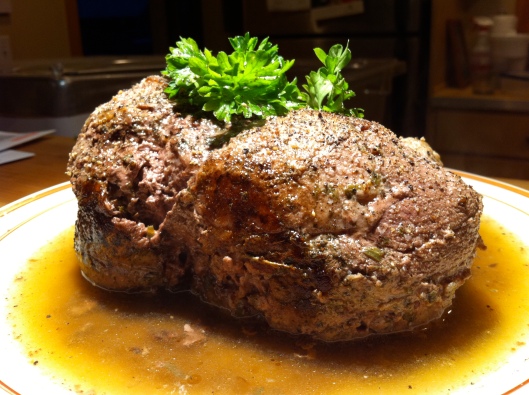 Victory From The Jaws Of Defeat

And yes, it turned out just fine.  Actually great.  Mangalitsa is delicious.  I wonder what it tastes like after 14 hours.  Maybe I’ll get a chance to find out – if Scott lets me.