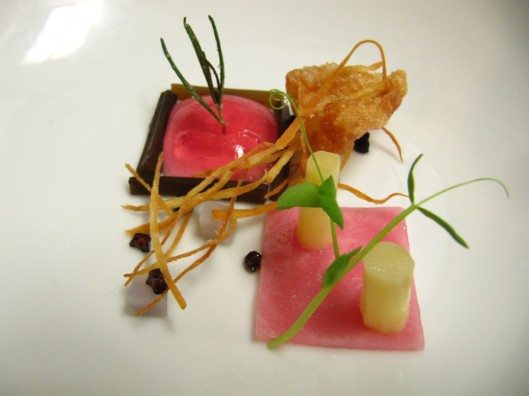 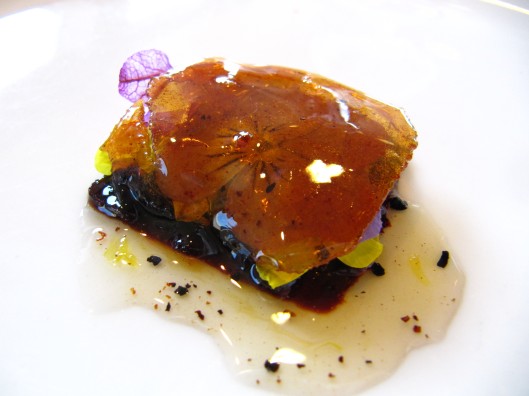 Work with pure cote-b790 and ultra tex is starting to pay off.   Traditional fruit leather on the bottom flavored like a candied apple.  Flowers are from my garden.  Glass is made of fresh orange and pear juice.  Sauce is an urfa biber and orange zest syrup heated to collapse the glass tableside.

I was talking with chef about a month ago about tapioca maltodextrin and how cool it was.  Take something with a fat content and mix it together and you can create powders!  Even something without a fat content can be transformed, it’s amazing!   I was selling the idea to him like it was a late night infomercial and he said, “alright, show me”.

So the next day I brought in my tub of maltodextrin into work and proceeded to spin some clarified butter with it and I had him taste it.  He grinned and told me, “alright, are you sure you can do this with the chorizo”.   I said, “yes, of course”.

I gave him a list of things I needed and when I asked for chorizo I wanted three pounds and he gave me five and said he didn’t want to run out.   The event we were planning for was the Seattle Food and Wine Experience.  I covered it last year as “media” and this year I would be at the event working behind the scenes (awesome!)….and not only would I be working the event I would also bring Mindy along to help out and unleash my chorizo powder creation on the world!

First run:  I sliced the chorizo really thin, about 1/16 of an inch then placed it in the ovens at work but the problem was that the ovens at work can’t be set to the setting I needed them to be….200F minimum.  I knew this would be a problem because I would be cooking the hell out of the chorizo.   I did it anyway and told chef that I would be able to control the chorizo at a lower temperature with my dehydrator.  He wasn’t very happy with the first run but he let me do it anyway after I convinced him I would get it to work.

So why cook it?!!!?!?  Well, this idea is pretty much what I like to call Modernist Bacon Bits.    Bacon bits are pretty cool but they are so 1990…..we need an update! The thing I like about bacon bits is they are crunchy…..I needed a way to make the chorizo crunchy but without losing a lot of color so off to the meat slicer and off to the dehydrator.

8 hours in the dehydrator and at a certain temperature these little pieces will keep their color and become crunchy!  The only problem I had was that I had a four tray dehydrator and I could only fit about 1/4# of chorizo at a time so I spent a few days cycling the chorizo through (ugh…).     After the chorizo comes out of the dehydrator it goes to the refrigerator to cool down.

The next step was to send it through the food processor and create bits.   I had to do these in batches too and I had to make sure the bits going in were cold.  After they came out I started doing small batches again of chorizo bits with maltodextrin.   I tasted it and it needed a bump in flavor so I took left over pieces chorizo and rendered them in clarified butter then processed that with the maltodextrin then combined the bits and the clarified butter mixture.

After combining I laid everything out on two sheet pans and refrigerated them for a few more hours then sent them through a tamis to create a smaller powder.

Pack it up and get it ready to take to work now.

When I went into work then I transferred the powder into shakers so that way we could finish off the plates we would be serving up for about 1100-1500 people at the Seattle Food and Wine Experience.   No pressure! Chef tried the powder as I was placing it in the shakers and he grinned again and said, “You know, I was a little worried about the outcome but you nailed it”.

So off to the show!

POWDERED CHORIZO!!!! IT’S ON THERE!!!! HOW COOL!!!   The fun thing about this dish is that it was pretty elaborate.  Two sauces:  Piquillo pepper puree and an aji amarillo sauce, rye bread crisp, pickled shallots (says red onion on the card but chef opted for shallots…they’re better for this application), crispy chick peas tossed in a fennel seasoning, fried parsley, and in-house hot smoked Neah Bay black cod.   There are days of work into this and the person that walks by and just grabs the dish will just eat it in two seconds and walk to the next booth…..that’s how it works!  However, we had people stopping in their tracks and asking about everything on the plate.   The sauce, the chickpeas, the cod, the powder, everything! It was a success!

The best part is that Mindy came along for the day to help out so it was nice to really show her the madness of what I do.  She had a great time!  She’s also a natural at plating so that helped out tremendously!

During the event chef told me that he wanted to do more stuff like this in the restaurant so I have a green light to bring my crazy ideas into the restaurant now and we’re now brainstorming the Voracious Tasting in April which will be the same kind of atmosphere but more restaurants will be featured.  We’ve tossed a few ideas around and in the next week I have to put these ideas in front of him so we can start a first run and do it all again.

Starting to work with iota carrageenan, which is pretty fun.  Also, a bit of work with Jeth’s centrifuge.  We’ll see what happens.

I finally had a chance to use my pressure cooker that I bought about a year ago.  I purchased it for two reasons:  #1 In Heston Blumenthal’s “In Search of Perfection” he suggests using a pressure cooker more often……SOLD! #2 I wanted to do a bunch of canning (never got around to it).

I purchased two 3.5# pieces of pork belly that I brined (one in Chinese 5 spice and the other in a smoked paprika/chili oil blend) then braised, then pressed.  The process when it comes to preparing pork belly is time consuming but with a few different pieces of equipment I was able to do this in record time….for me anyway.

The brining process took me the same amount of time….about 4 hours.  Luckily, Jethro has a vacuum chamber sealer so next time I’ll go that route and save even more time!  The cooking time of the pork belly is what really changed things.   Normally, a 3.5# piece of pork belly would take about an hour to an hour and a half to braise properly in the oven.  I knocked one out in 20 minutes then the other piece in 18 minutes.  The pressing and cooling process took another 45 minutes.

The next time around is what I’m excited about.  Essentially, I could have a piece of pork belly brined, cooked off, and ready for pressing in under an hour.   Time is everything in a kitchen and space is a concern at home.

The great thing is that I was able to dehydrate tapenade ingredients in my oven overnight then cook the pork belly in the pressure cooker. Once all of the tapenade ingredients were ready I placed them in my spice grinder then emulsified them with extra virgin olive oil then slowly worked in tapioca maltodextrin to create that pavement effect you see in the picture above.

After I made the two pork bellies I made a beef stock in the pressure cooker.  Traditional French style beef stock with all the bells and whistles in 45 minutes instead of 8-12 hours.  The only problem I had was that the stock was cloudy but I cleaned it up by cooking some egg whites in the stock which cleaned it right up.  I talked to Jeth and Scott about this and Jeth suggested after I make the stock to use the centrifuge so I will have a super concentrated stock…..genius.

The picture above is the 5 spice pork belly, tapenade “pavement”, and flower.  With a few more adjustments and tinkering I think this will turn out to be a world class dish. 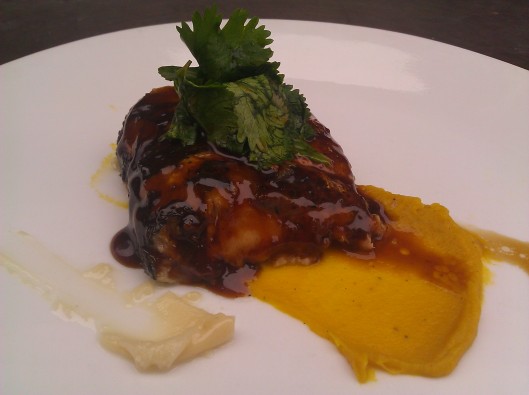